A Proposal in Turkey

A Proposal in Turkey

The most magical proposal in Turkey caught our eye on Instagram last year, we just knew we had to share it with you guys!

When Cuan decided to pop the question to Carrie-Anne, he knew he wanted to make it the perfect proposal, and he did just that! A sunrise surprise awaited Carrie-Anne when they were on holiday together in Turkey.

The ring, the picnic, the amazing views… this proposal is just the perfect start to our Wanderlust Wednesday series for 2020! 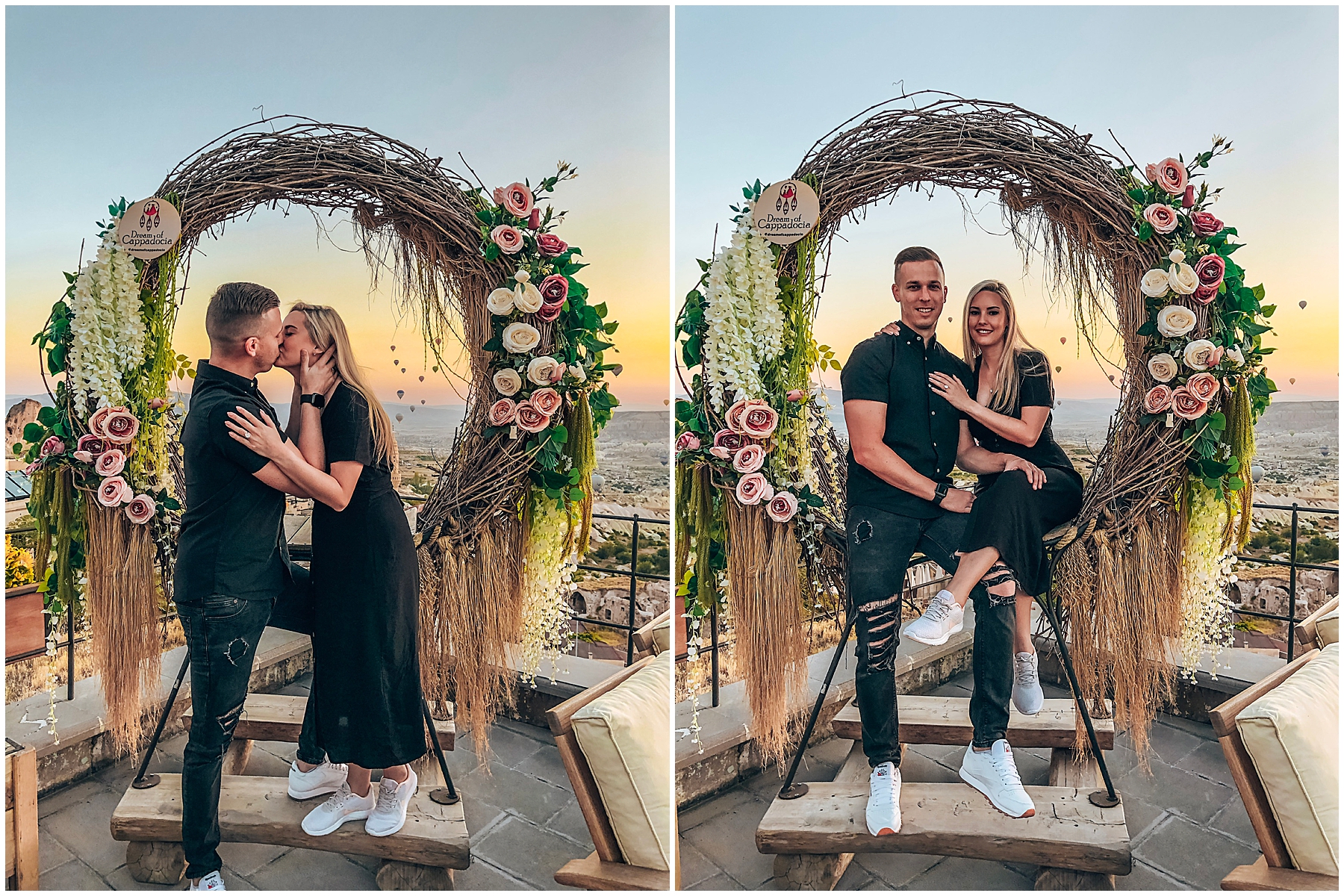 Hey guys, please introduce yourself to the Hooray readers…
C + C:  Hi guys! Carrie-Anne and Cuan here, we have been dating for 7 years and live in sunny Durbs with our 2 fur kids. We met through work and actually didn’t get along at first, Cuan likes to say I chased him but I clearly remember his persistence on getting me to go for an after work drink with him and when I finally agreed, the rest as they say, is history. 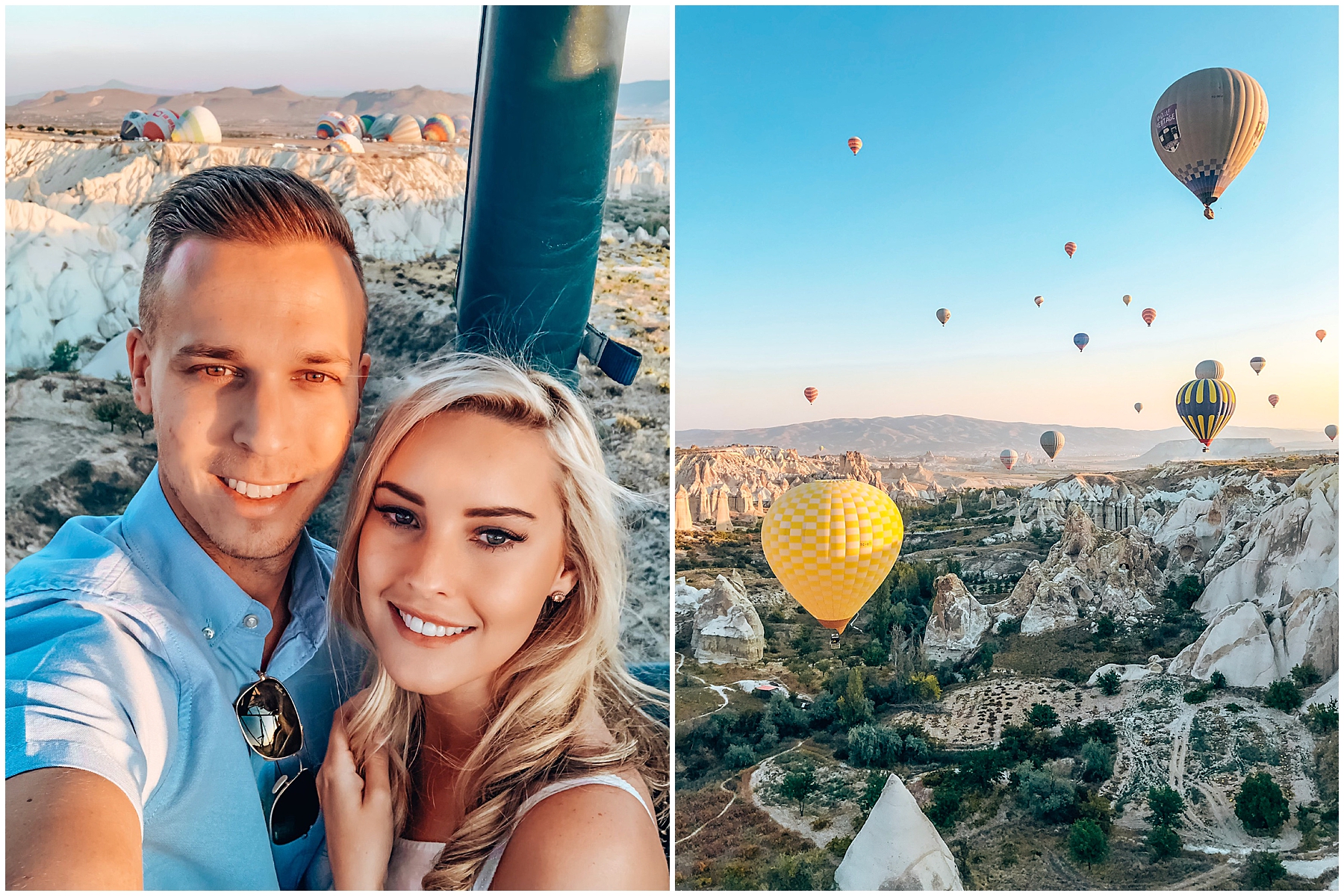 Hooray: A destination proposal, tell us more!
C + C: As a couple, Cuan and I love to travel, and have been lucky enough to already tick a few countries off of our ever growing list. We had been speaking about going to Turkey for our next holiday for some time. It has become so popular recently and the country looked stunning. Cuan is from Lebanese descent so has always wanted to travel to ‘the motherland’ and since we were close by incorporated 2 nights in Beirut. Since I was in high school I have always loved the idea of getting engaged in a hot air balloon but never really directly told Cuan this, of course my girlfriends knew though. So when I got my 30th birthday present in July, it was a trip to Turkey and Lebanon my spidey senses pricked up, could it be, maybe, no, yes, the hot air balloon capital of the world! The trip was planned to spend 5 nights in Cappadocia, 2 nights in Beirut and then 4 nights in Istanbul. 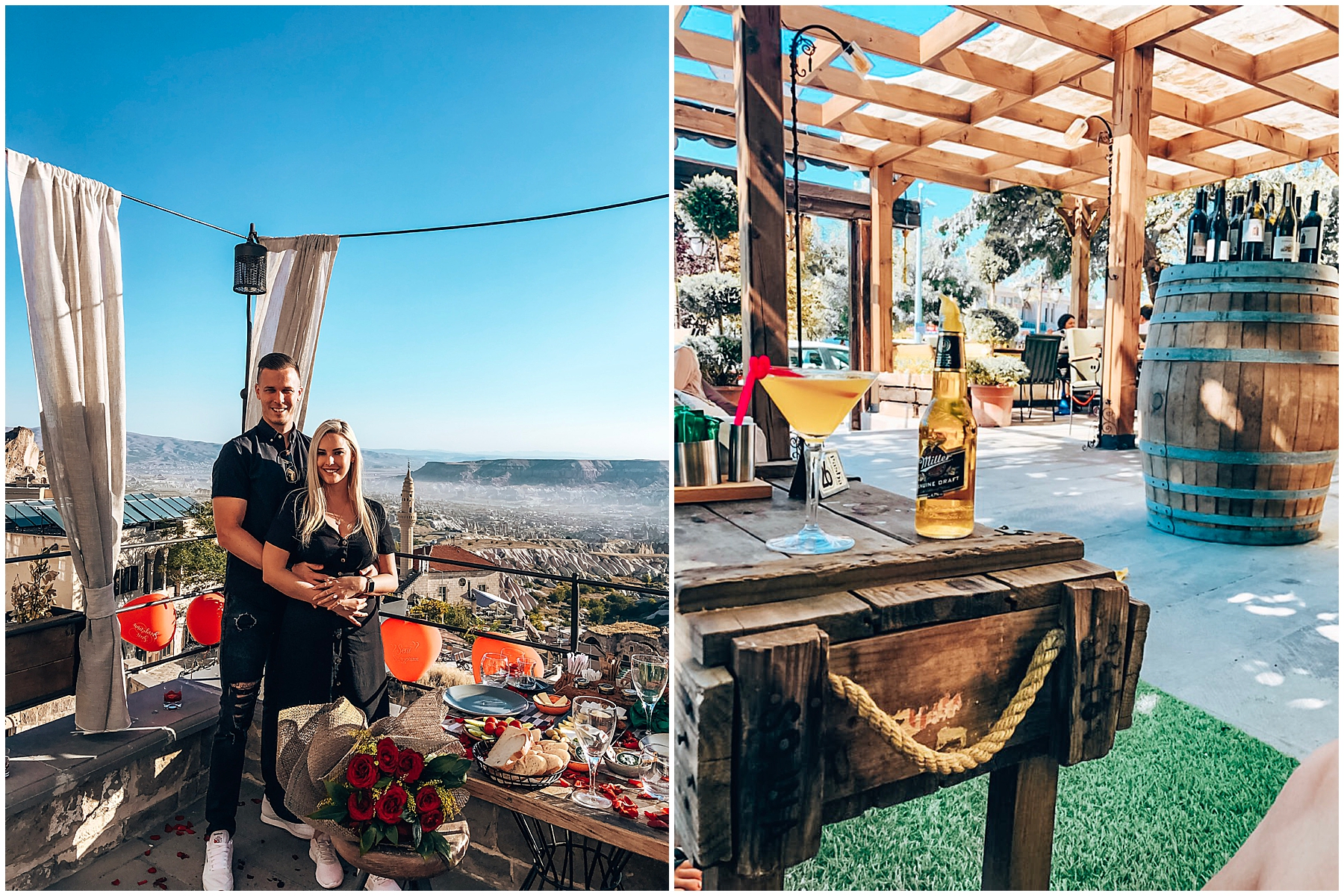 Hooray: The proposal, how did he ask? Give us all the details!
C + C: Before we left for the holiday we had planned to wake up early one morning and take some pictures with the balloons in the background. They go up really early at about 5am when the sun is just starting to show and the hotel did an early breakfast to accommodate everyone. What I didn’t know was that when we checked in and I was showering Cuan snuck up and organised everything with the hotel concierge. The next morning I woke up and started getting ready, ditching my original outfit because it was freezing and I just wanted to be comfortable. As I stepped out of our Cave Suite to climb up the stairs and go onto the roof I was told to rather go into the restaurant which I walked through and onto the balcony which had been set up with balloons, red candles, roses, the most amazing breakfast and champagne, and that’s when I knew it was about to happen! After our waiter poured us champagne Cuan took my hand and walked me over to the edge of the balcony and said ‘Its about to go down’, both of us giggled before the tears started, he went down on one knee and finally asked which I responded with an ‘Obviously!’. It was truly the most magical setting and I couldn’t have imagined anything better. I still watch the video and tear up, it was such a special moment in the perfect setting with the most perfect person. 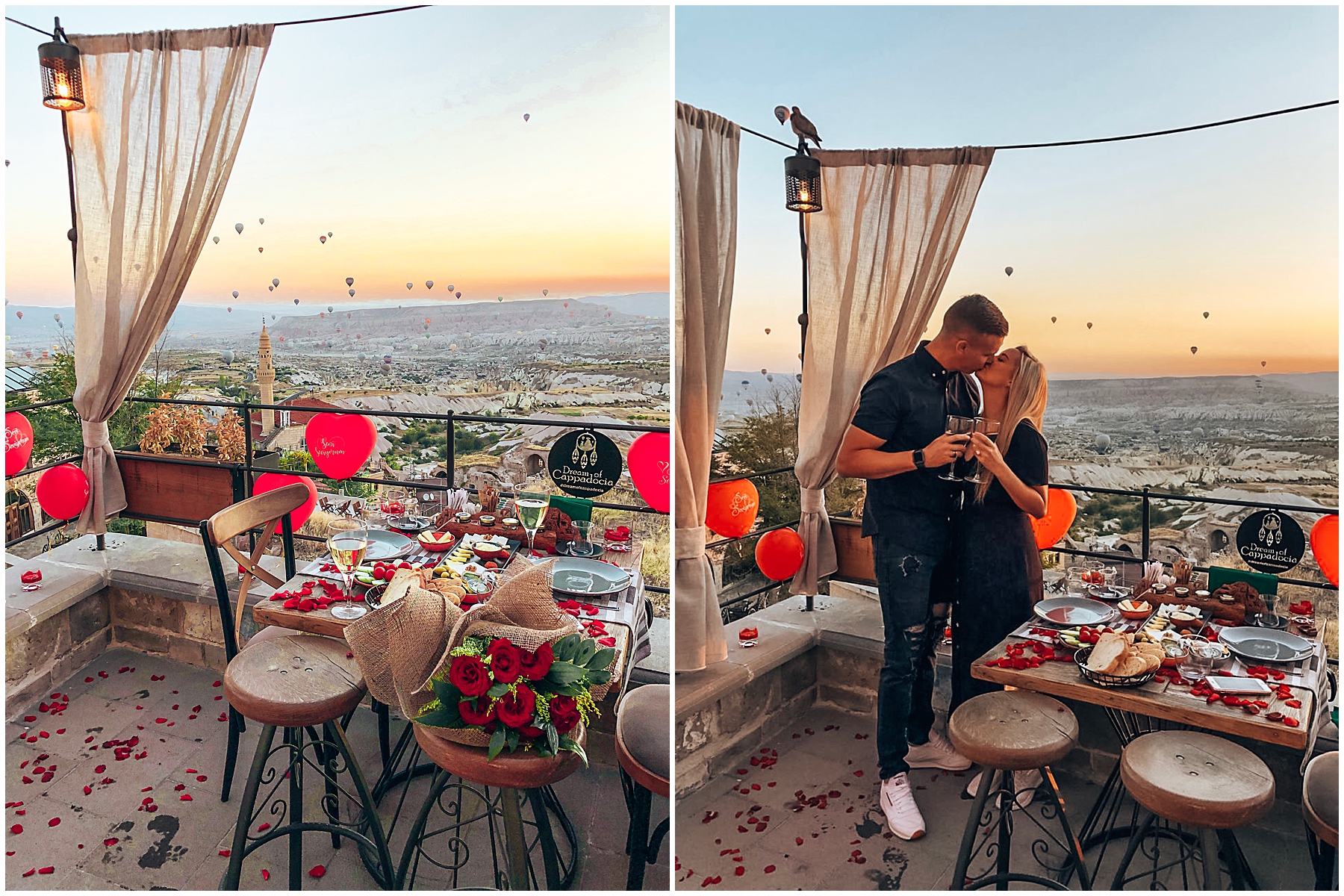 Hooray: Were you expecting it?
C + C: I was and I wasn’t. We had been to try engagement rings on a couple months before the holiday but I also knew that Cuan would want to surprise me so thought this might be too obvious. I did think it might happen on the hot air balloon the following day but was quite grateful it wasn’t as there are surprisingly between 20-30 people in the basket so it wouldn’t have been private at all.

Hooray: Did he give you any hints, like, “go get your nails done?”
C + C: Not even one haha! Luckily because it was a holiday I had got all the glam done before we left.

Hooray: Tell us about your ring, we think it is just GORGEOUS!
C + C: Since we had been together for over 7 years I had been quite vocal about the rings I liked but had sent so many different pictures so when it came time to purchasing THE ring he was a bit confused. We went to try on a few different shapes and he took the rest into his own hands with our amazing jewellery designer David Mazzoni. I absolutely love the pear shape as it is so unique and it is literally my dream ring, I couldn’t have dreamt up a more stunning ring if I tried! 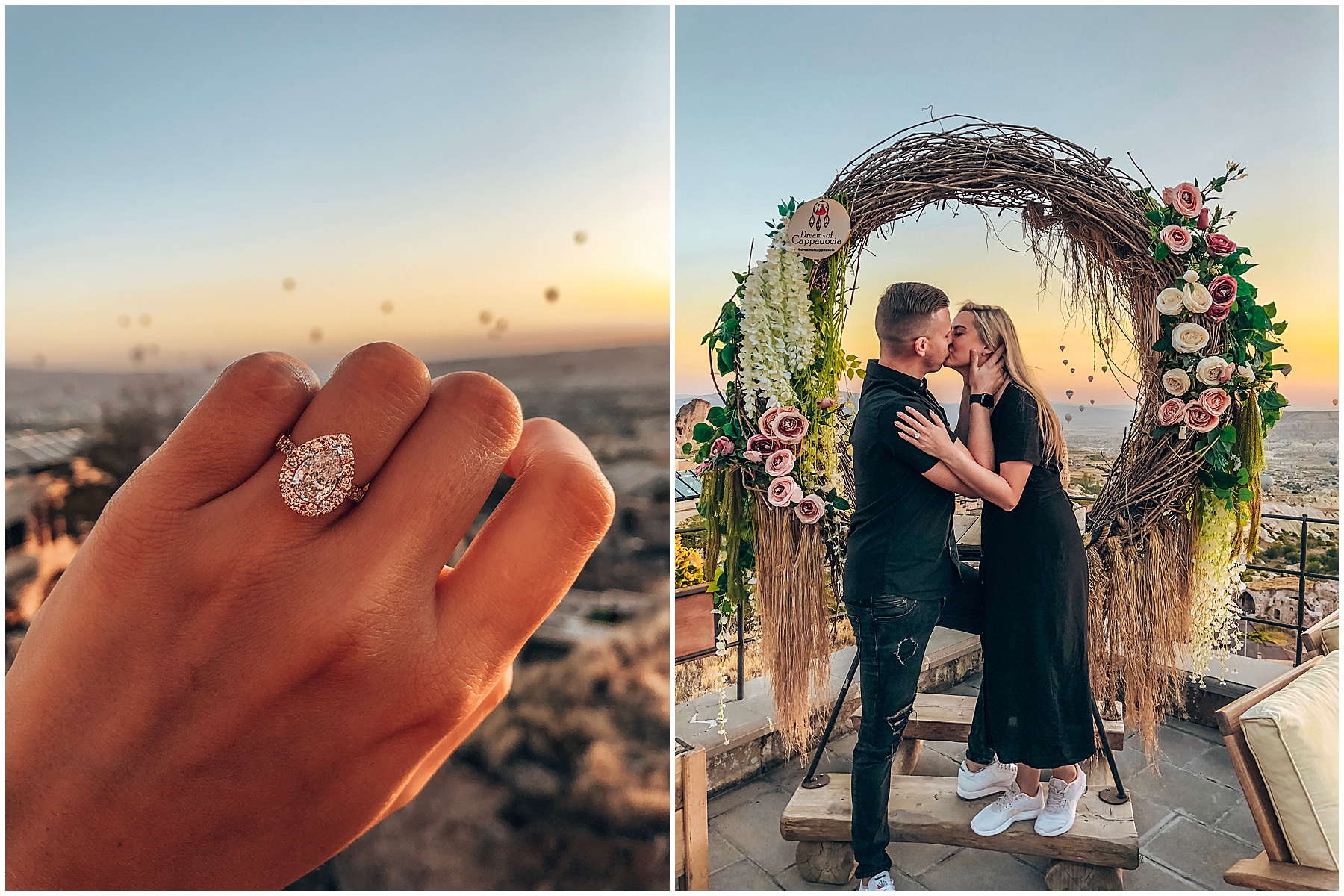 Hooray: Did he ask your parents permission?
C + C: Yes he did, he met with my mom a few days before the trip. She has been waiting for this to happen so I can only imagine how excited she was, I’m told there was no hesitation!

Hooray: Advice for anyone wanting a surprise destination engagement
C + C: Don’t think about it too much and actually enjoy your holiday. Soak in every moment as it truly is the best day and try get someone to film it if you can. I was so grateful to have it all on camera as it goes by so quickly I couldn’t even remember what was being said. And for the guys, do it at the beginning of the holiday and make sure the ring fits! The best feeling is when you are both on cloud nine for the whole trip and you can actually wear your pretty ring! 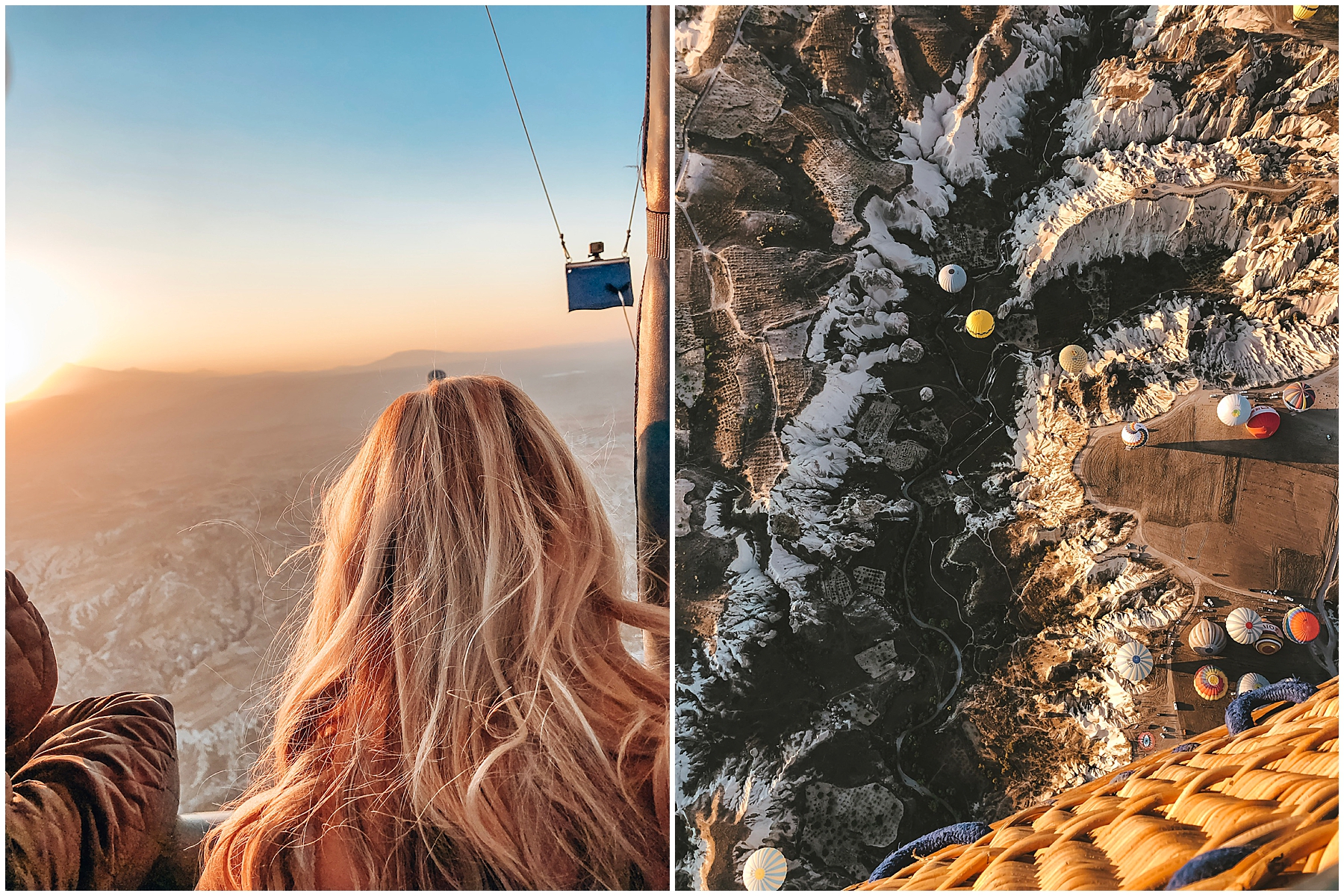 Hooray: After such a magical destination for your engagement, have you thought of where you would want to go for your honeymoon?
C + C: Nothing is set in stone but we were actually thinking local, something we haven’t done together is a game reserve and we have so many great ones on our doorstep. With family flying in for the wedding we would ideally like to be home for Christmas. 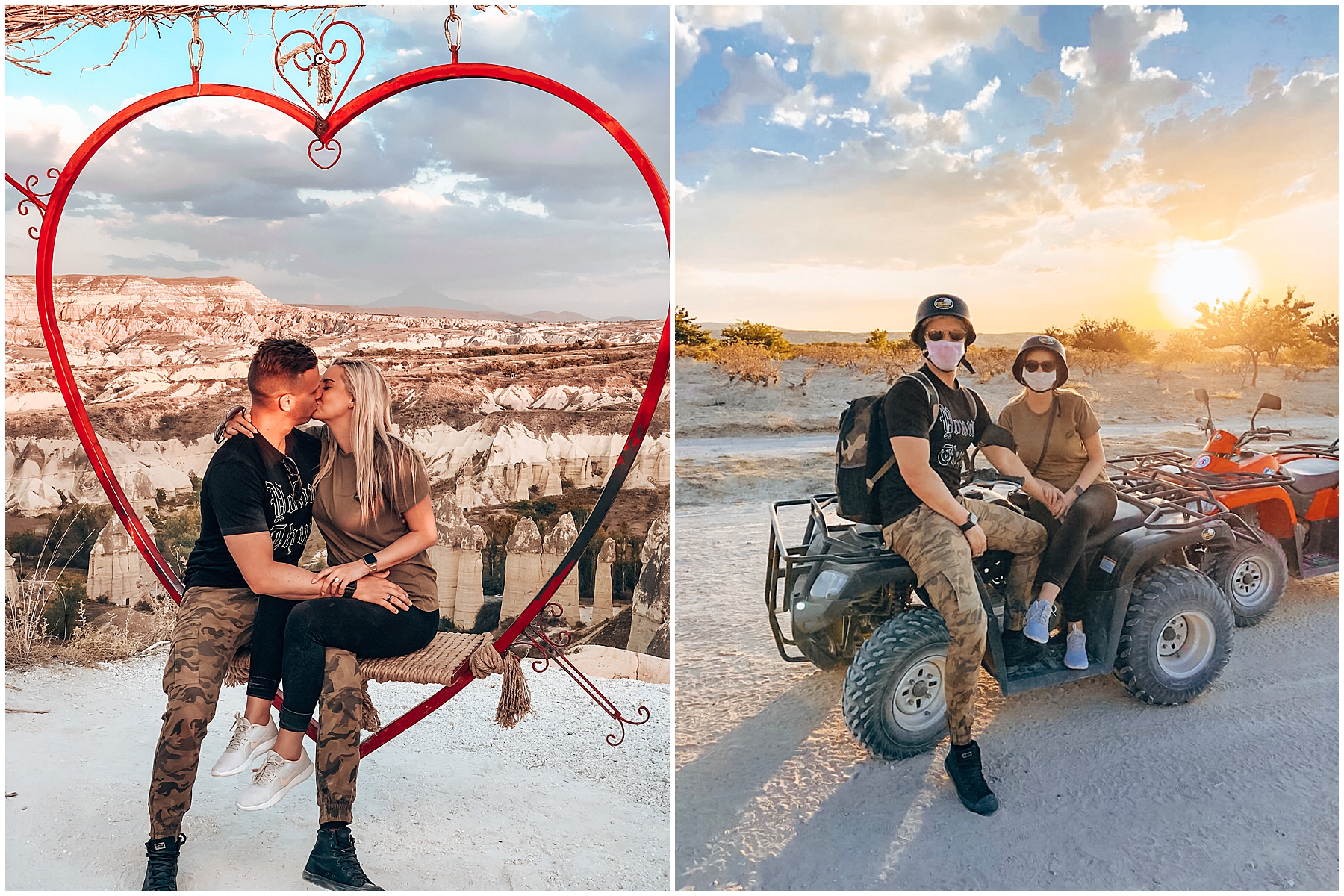 Carrie and Cuan, thank you so much for sharing your engagement story with us today. If it is anything to go by, you are both in for many more adventures in your married life!

Wishing you all the best for the months of wedding planning ahead!