Today we have Tegan back again, sharing the next part of her and Branden’s amazing Greek adventure.
(If you haven’t read the first part of their journey, stop right there and head on over to read it first! Click here.)

To conclude their European Summer holiday, Tegs and Branden visited the Greek Islands of Milos, Paros and Mykonos – it all looks so dreamy, we are not too sure which to add to our bucket list first!

Yacht trips in crystal clear water, breakfast dates by the pool and glasses of wine in their private jacuzzi – these two certainly know how to make the most out of their travels!

Take it away Tegs…

As mentioned in my previous blog post, Branden and I started off our summer Europe trip with the Amalfi Coast in Italy, and then onwards to Santorini in Greece. From Santorini, we island hopped our way through Milos, Paros and ending in Mykonos. I think it’s safe to say, Greece has my heart! I’m already itching to go back. 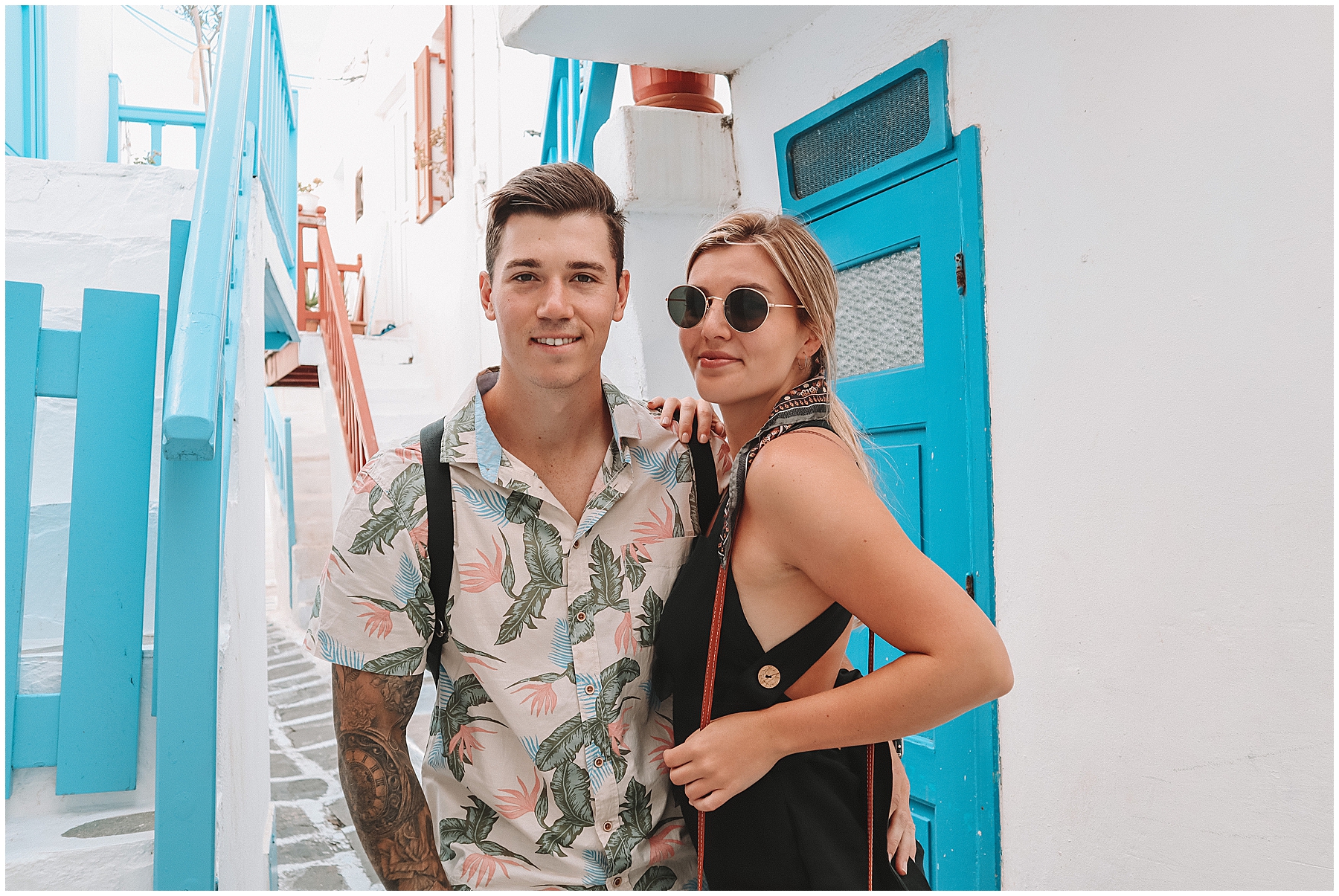 Milos
From Santorini, we caught a ferry to Milos. Milos was my favourite island we visited during our trip. The island certainly lacks the glitz and glam factor which may be a shock at first, but the simplicity and beauty of the island is what captured my heart! Unlike other well-known Greek islands, Milos wasn’t as tourist-ridden which was amazing. Milos is known for their beaches – but beware, the wind will certainly come out to play in full force. We stayed at Milos Hotel which was a two-minute walk from docking at the harbor (which was bliss). There are lots of little cafes and restaurants in the harbor area and in the evenings, this turns into a festive central hub. Because we were only staying in Milos for two nights, we opted to forgo hiring a car. Milos is an extremely small island so the bus trips between each area were super quick and the bus system itself runs on a very prompt time schedule, so it’s really easy to maneuver. 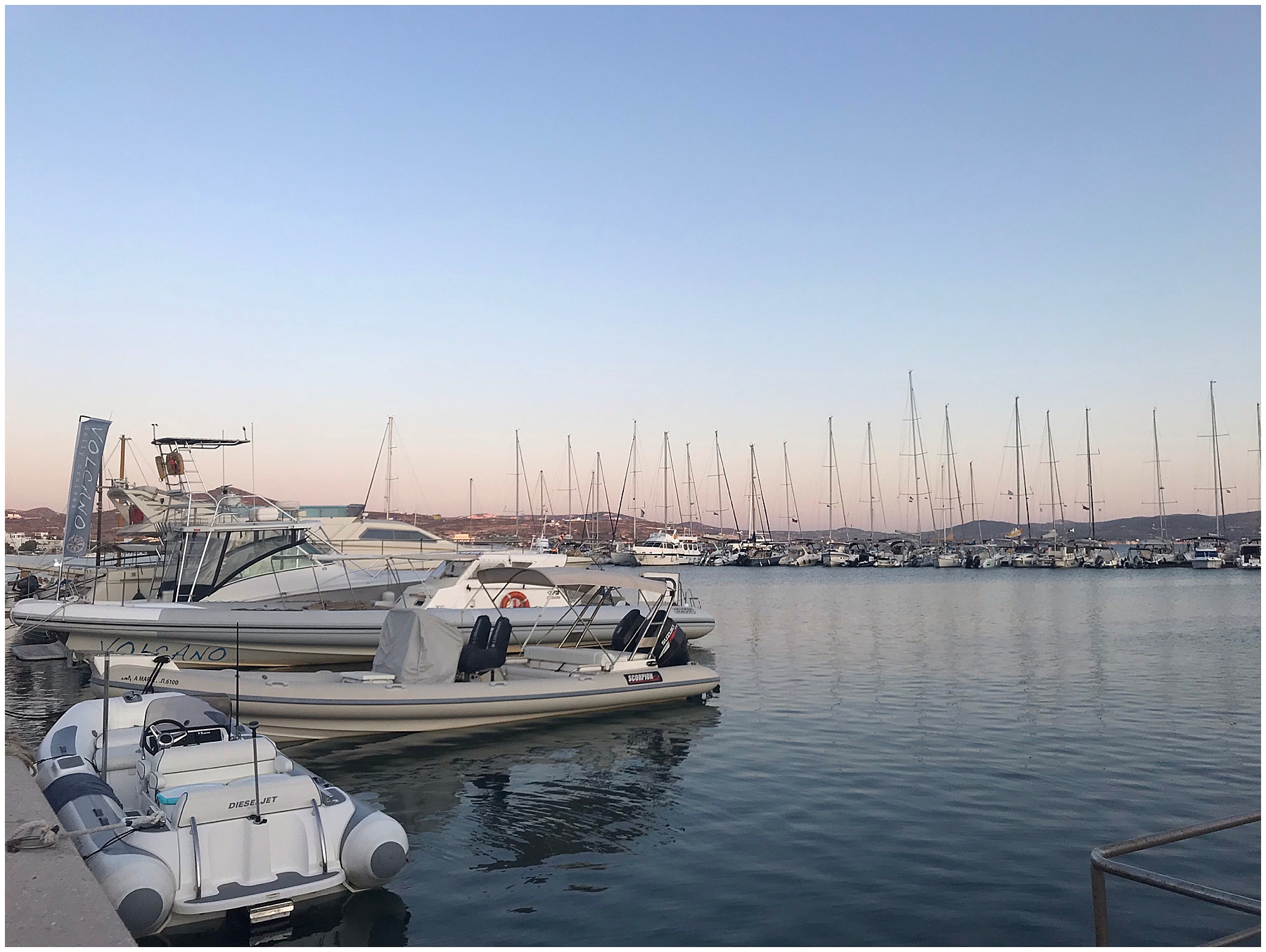 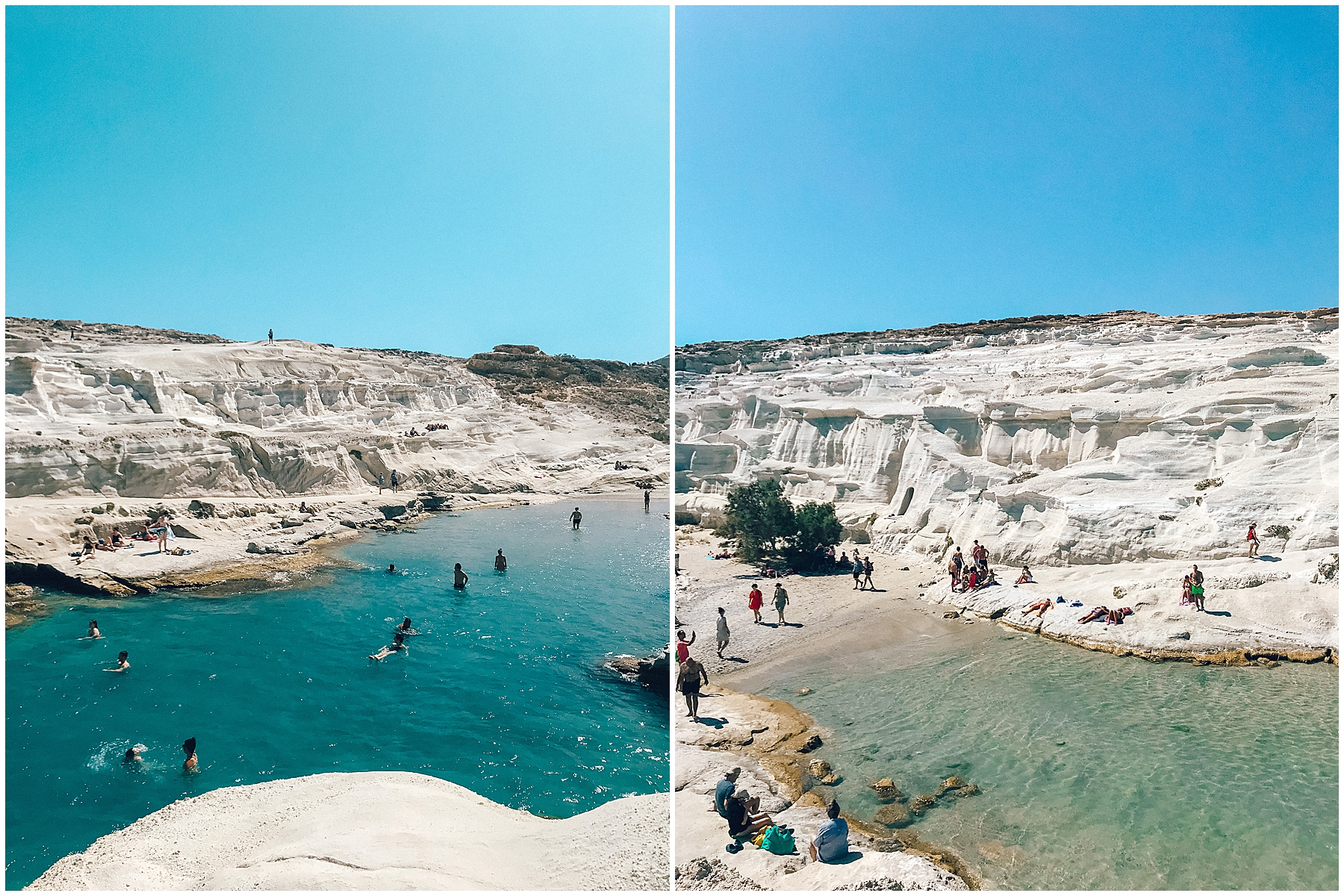 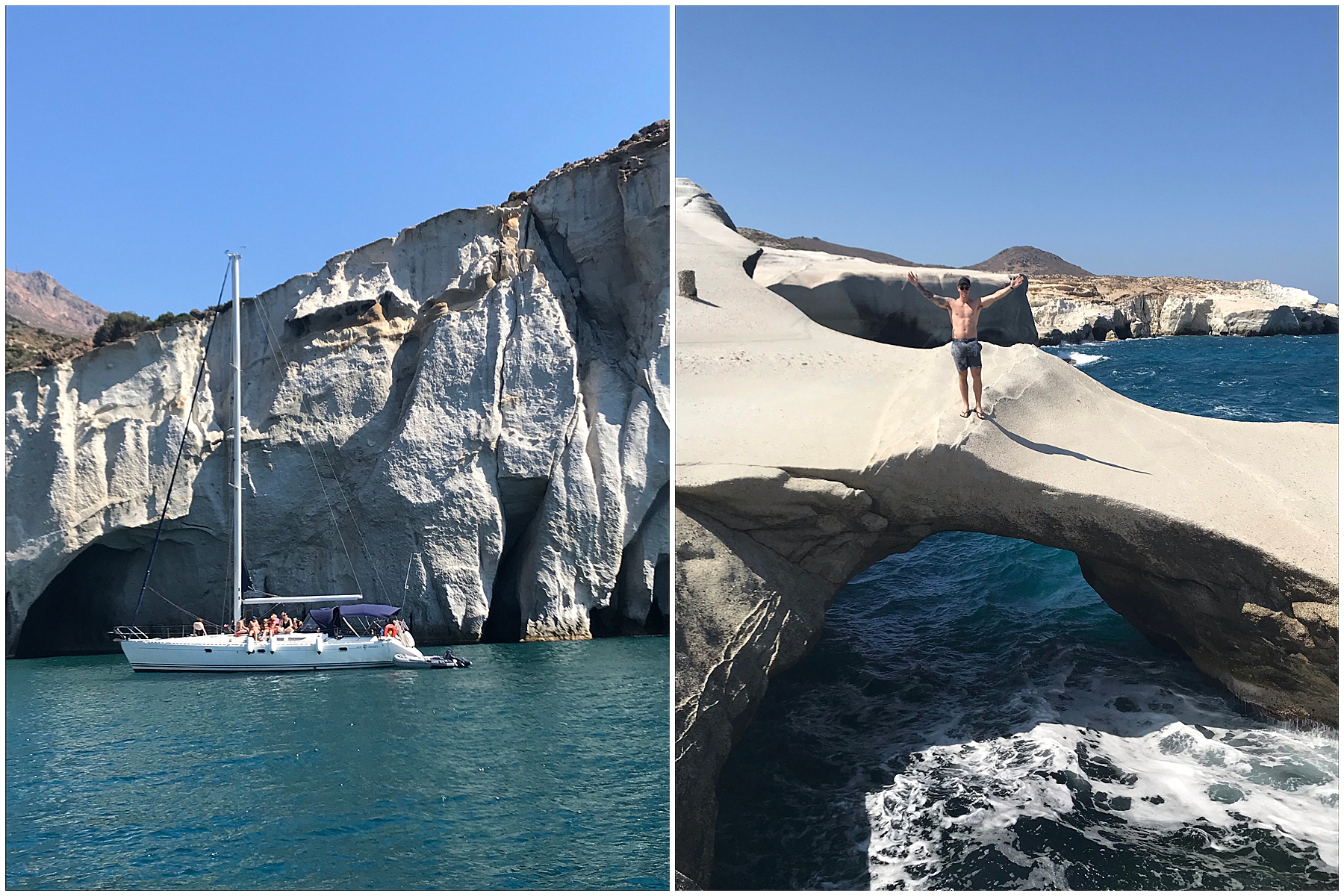 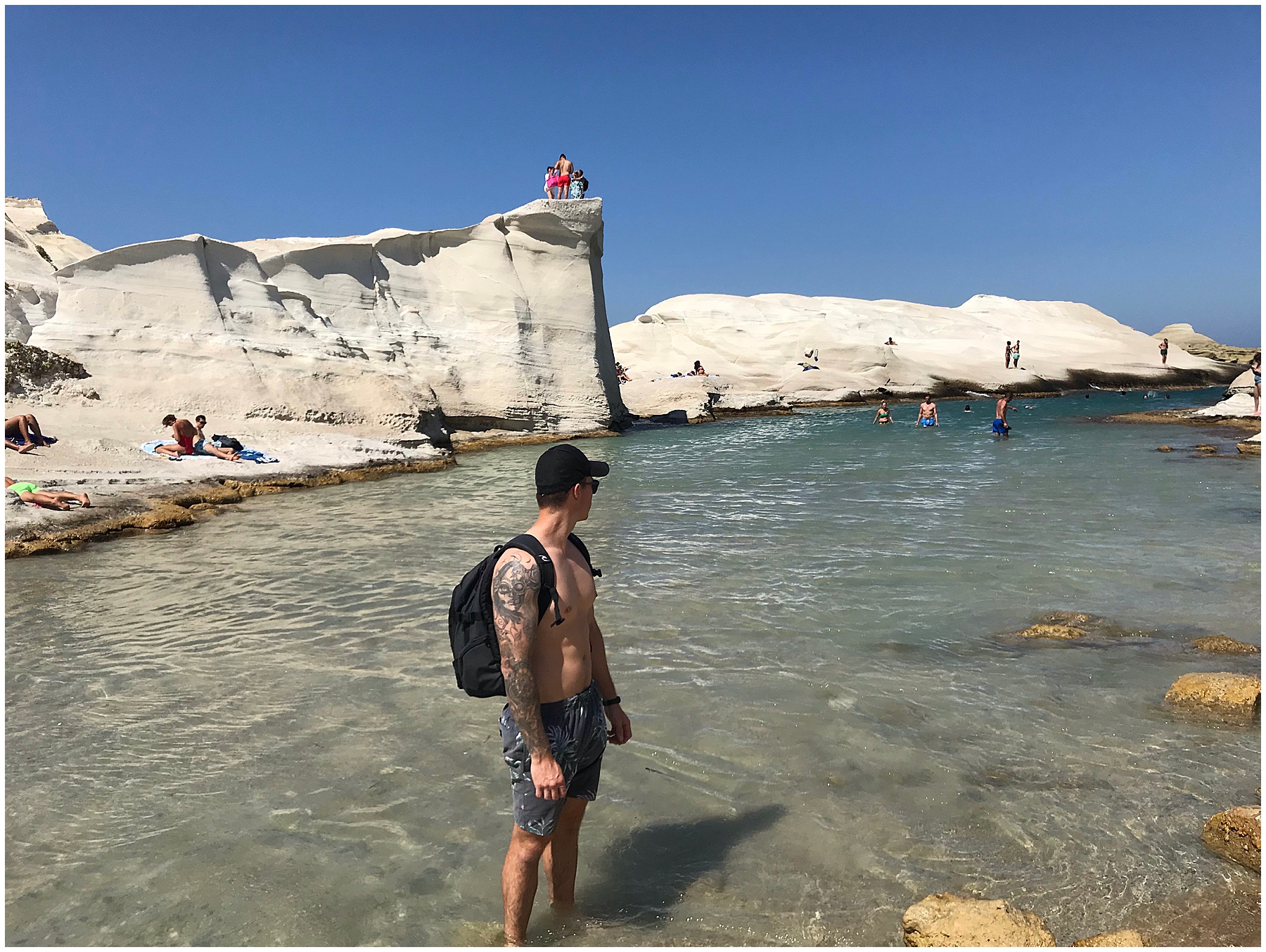 The ultimate beach that we visited during our trip had to be Sarakiniko. Sarakiniko is made up of volcanic white rock in contrast to the turquoise blue water. It’s truly spectacular! Along with Sarakinikio, I would also advise visiting the following beaches:

One of the highlights of our entire trip was our sailing day trip where we sailed around the island and saw the incredible Kleftiko caves. This is a must! You can take a walk around the harbor the evening prior where there is an abundance of different sailing companies and you can make your booking then. We booked and paid for our boat trip with Polco Sailing before even flying to Greece because they are probably the most popular sailing company in Milos and get booked up very quickly! There are many other day trips that average on 30 euros + per person. With Polco Sailing, we paid 90 euros per person for our day trip that started at 10am – 8pm (finishing off with watching the most incredible sunset out at sea). I would highly suggest going with Polco as they included drinks on the house (or rather, yacht) throughout the day as well as the most scrumptious authentic Greek meals served along our different stops. The 52-foot yacht we went on was so luxurious and just made the entire day. Everyone needs to experience seeing the beauty of Milos out at sea – it’s truly out of this world. 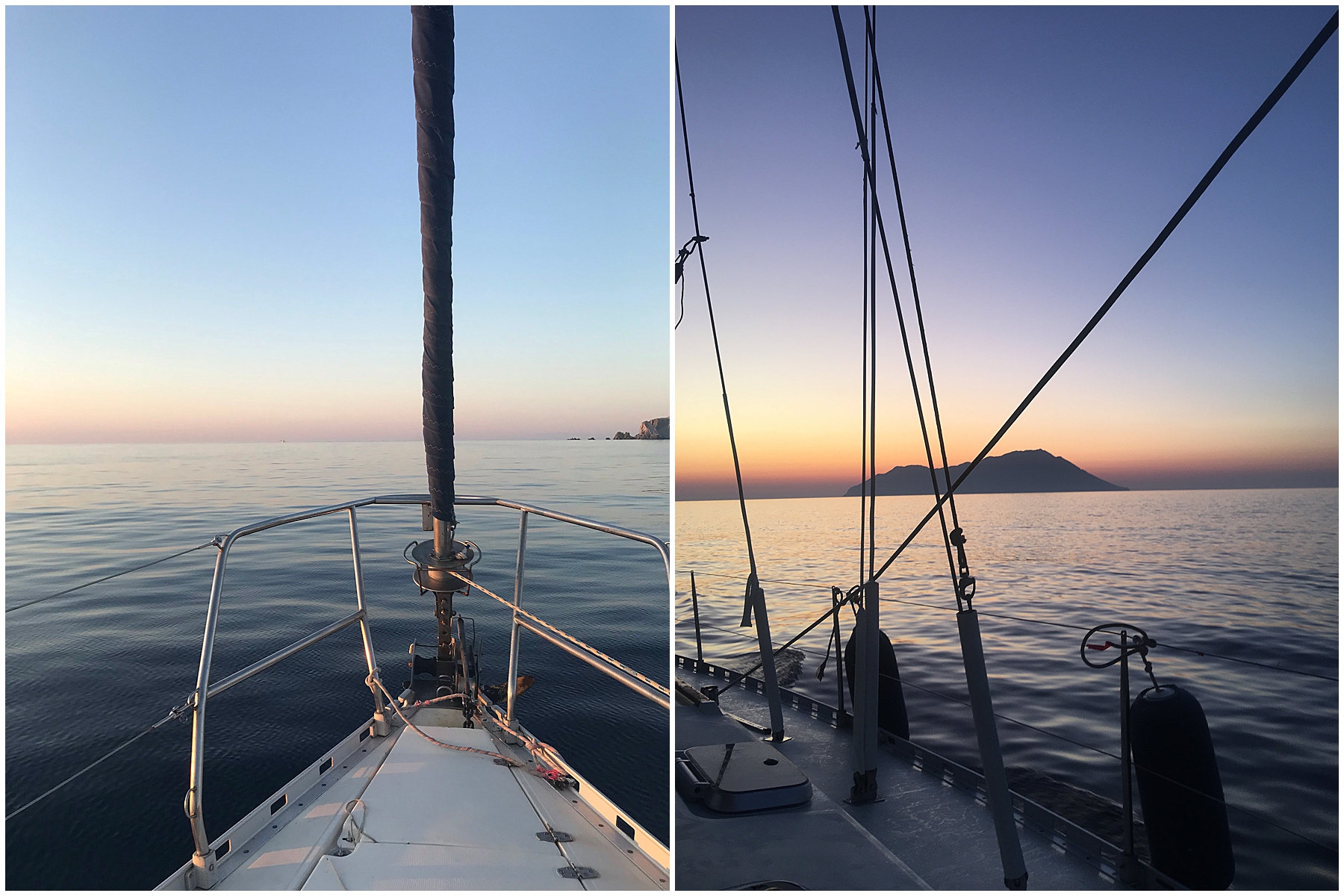 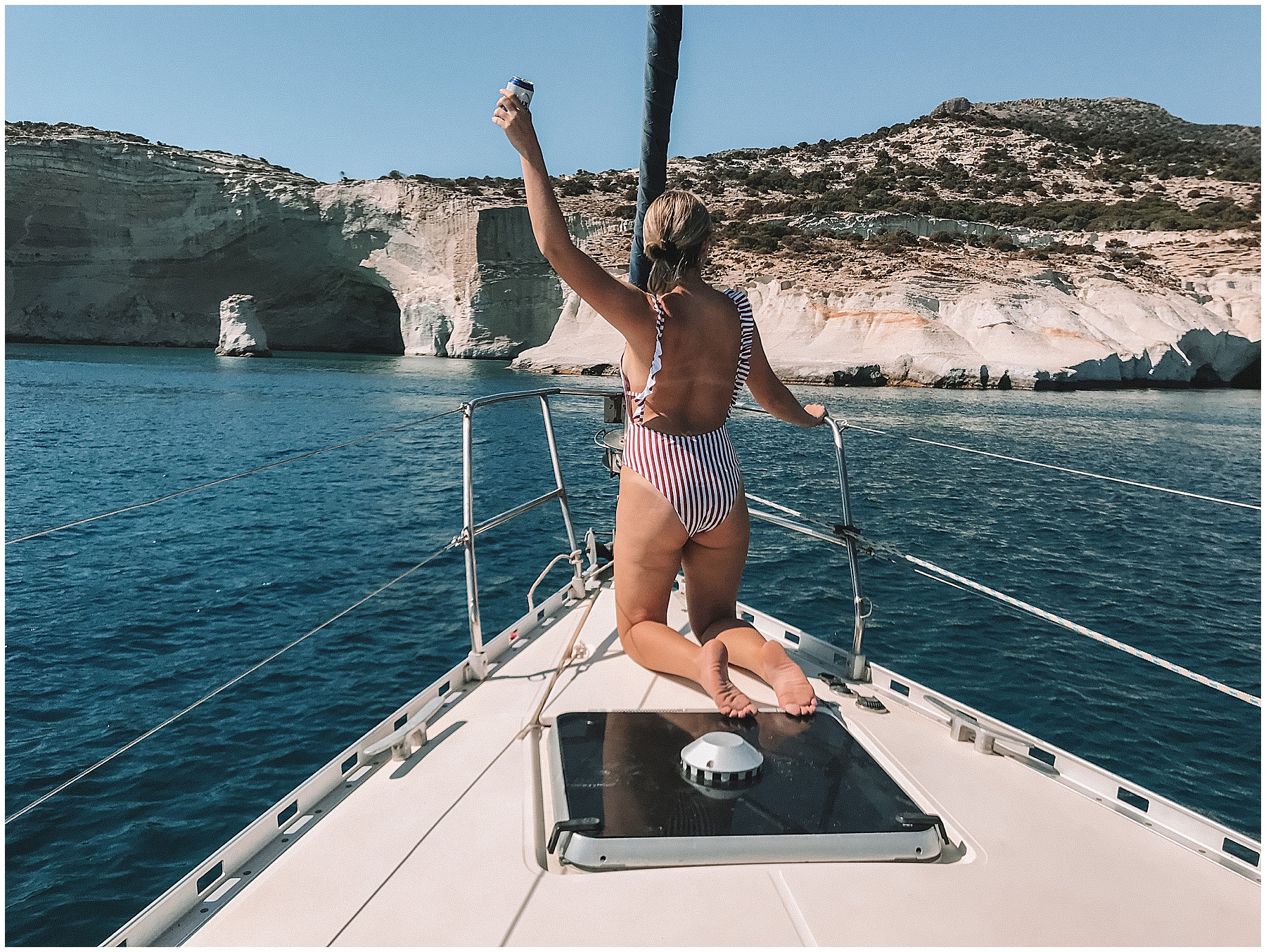 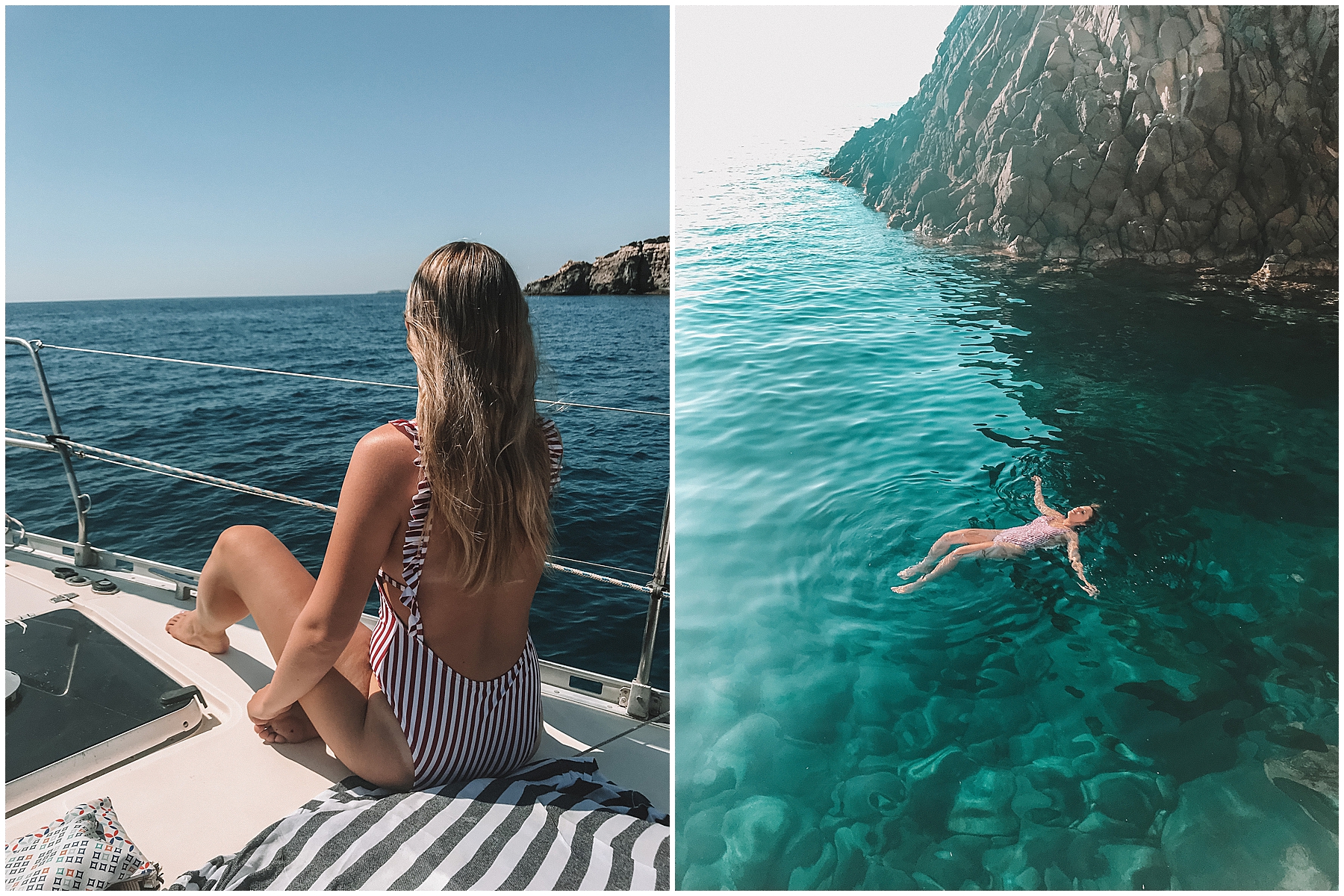 Paros
We stayed in the main town called Naoussa – which I would certainly advise. The town itself is picturesque and it’s surrounded by strips of restaurants, shops and cafes. When we arrived to the main harbor of Paros, via ferry, there was an abundance of car rental reps waiting as we docked. After looking into it, a taxi to Naoussa would have cost us 30 euros, so we opted to go for a car hire of 40 euros per day instead. This was such a great decision as it allowed for us to properly explore the small island of Paros. Whilst we visited a few beaches such as Kolibithres and Kalogeros, we found that Paros was great for relaxing and wondering around the town. 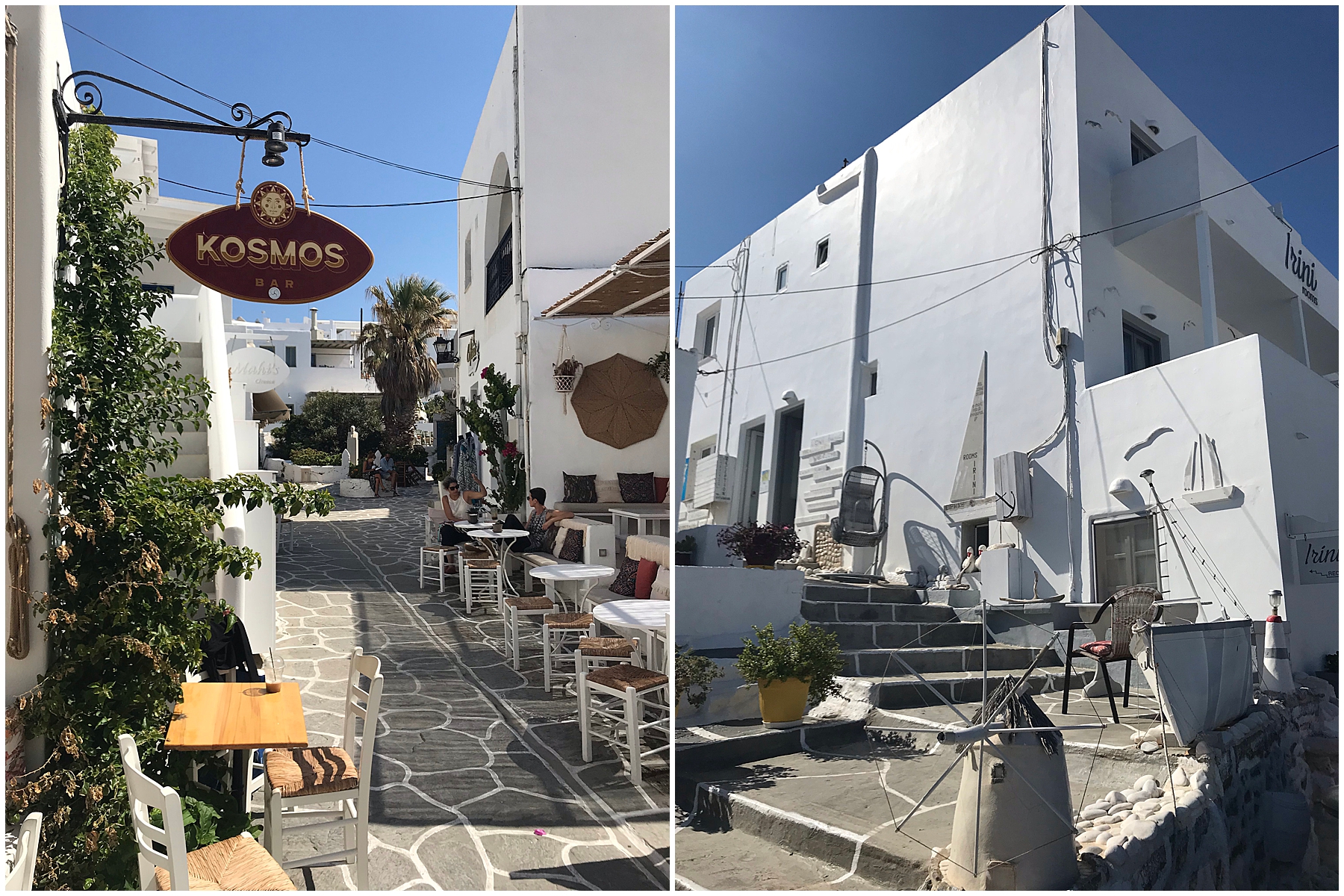 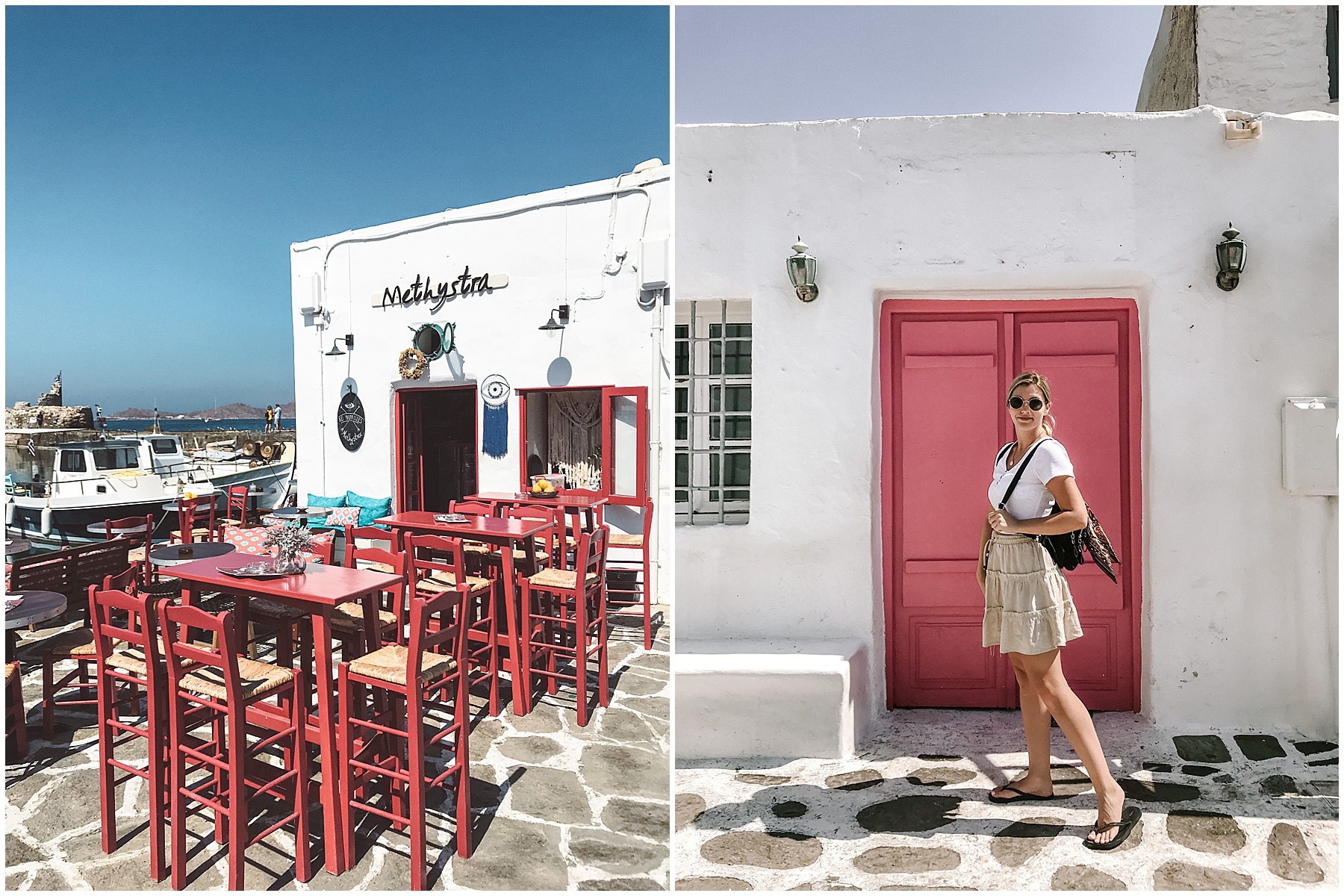 We stayed at a small guest house called Irini Rooms, which I couldn’t rave about enough. They were so centrally located to the hub of Naoussa. In the evenings, we took a stroll down to the town and sipped on a few cocktails before heading to dinner. The vibe and buzz around the different bars were unreal! Our favourite cocktail bars were San Fos, Agosta Bar and Sante Cocktail Bar. The restaurant options go on and on, and you will be sure to find something that suits your liking when walking around. Personally, Branden and I tried eating as authentically Greek as possible. We had the best octopus ever during our stay in Paros. 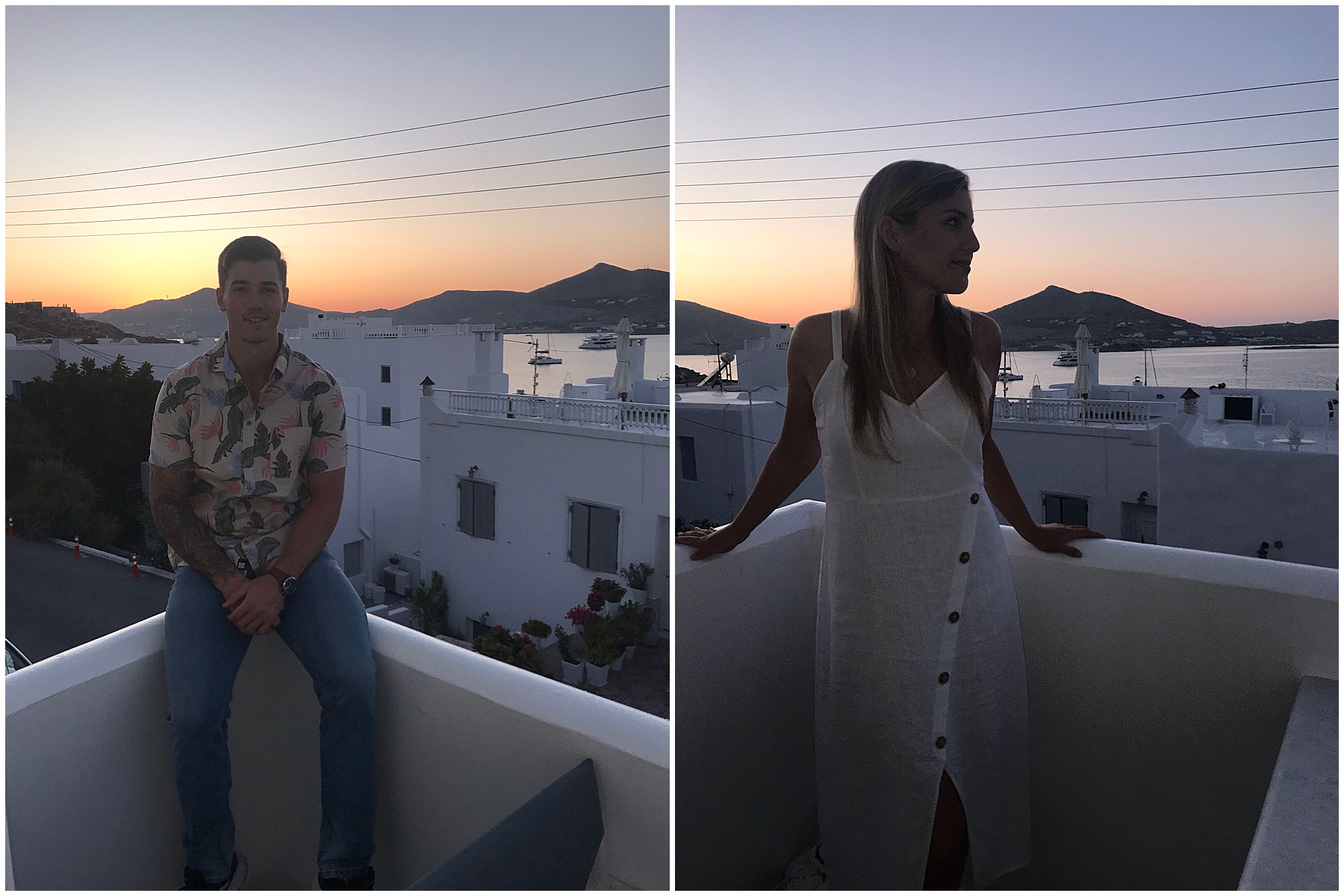 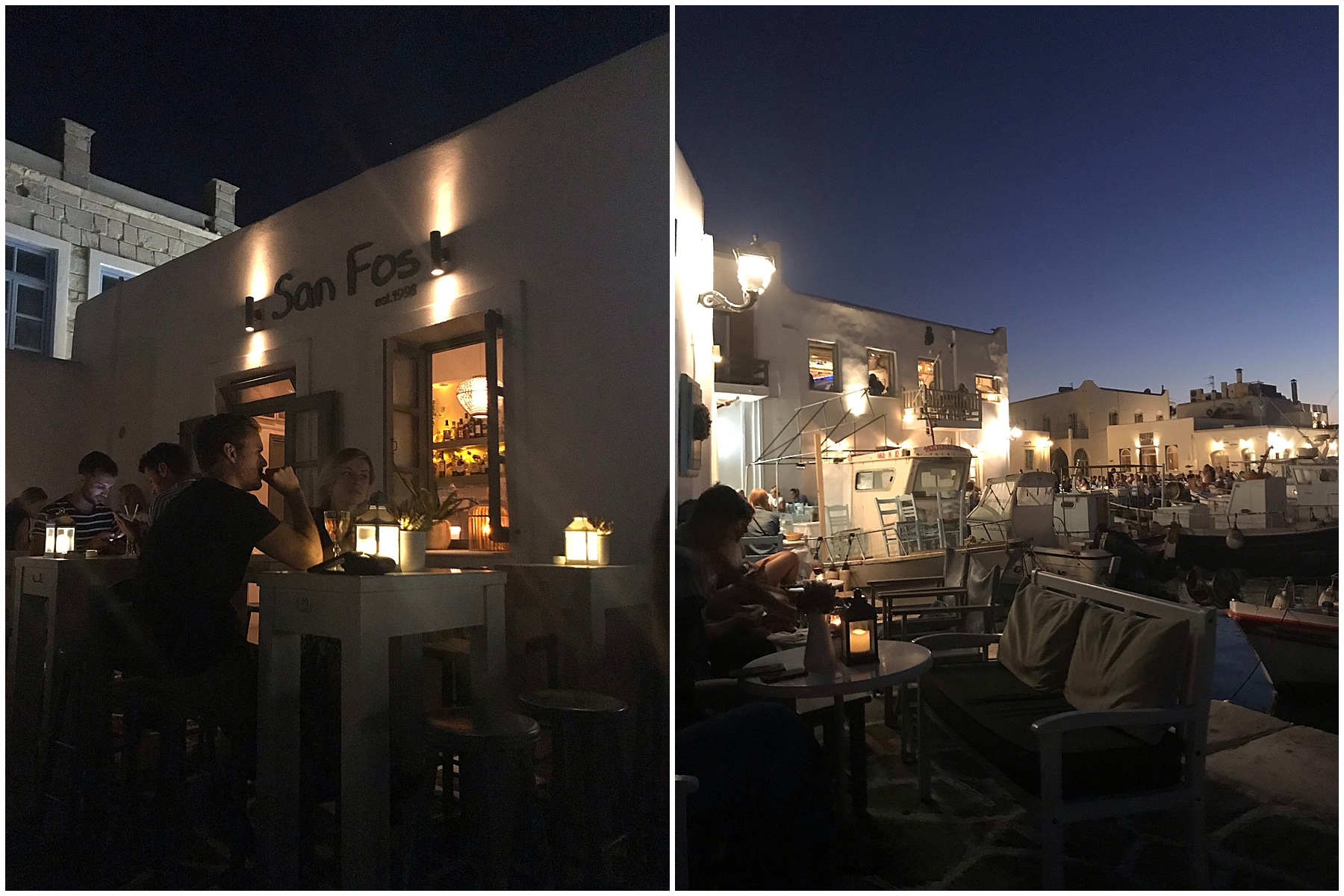 Mykonos
We docked in to Mykonos new harbor, where we caught a short 5-minute sea bus (that runs every half an hour and was 2 euros each) to the old harbor and Mykonos town. Once we docked at the old harbor, we hired a car from a car rental just down the road from our accommodation which was super convenient. We managed to bargain them down to 40-50 euros per day for the car rental as opposed to 60 – 70 euros per day. We stayed at Magic View Suits that was on the edge of Mykonos town. The location was perfect as we could escape the buzz of the central town but still be in walking distance of everything. Mykonos town is known for the windmills as well as the fact that they have loads of various restaurants and night clubs. 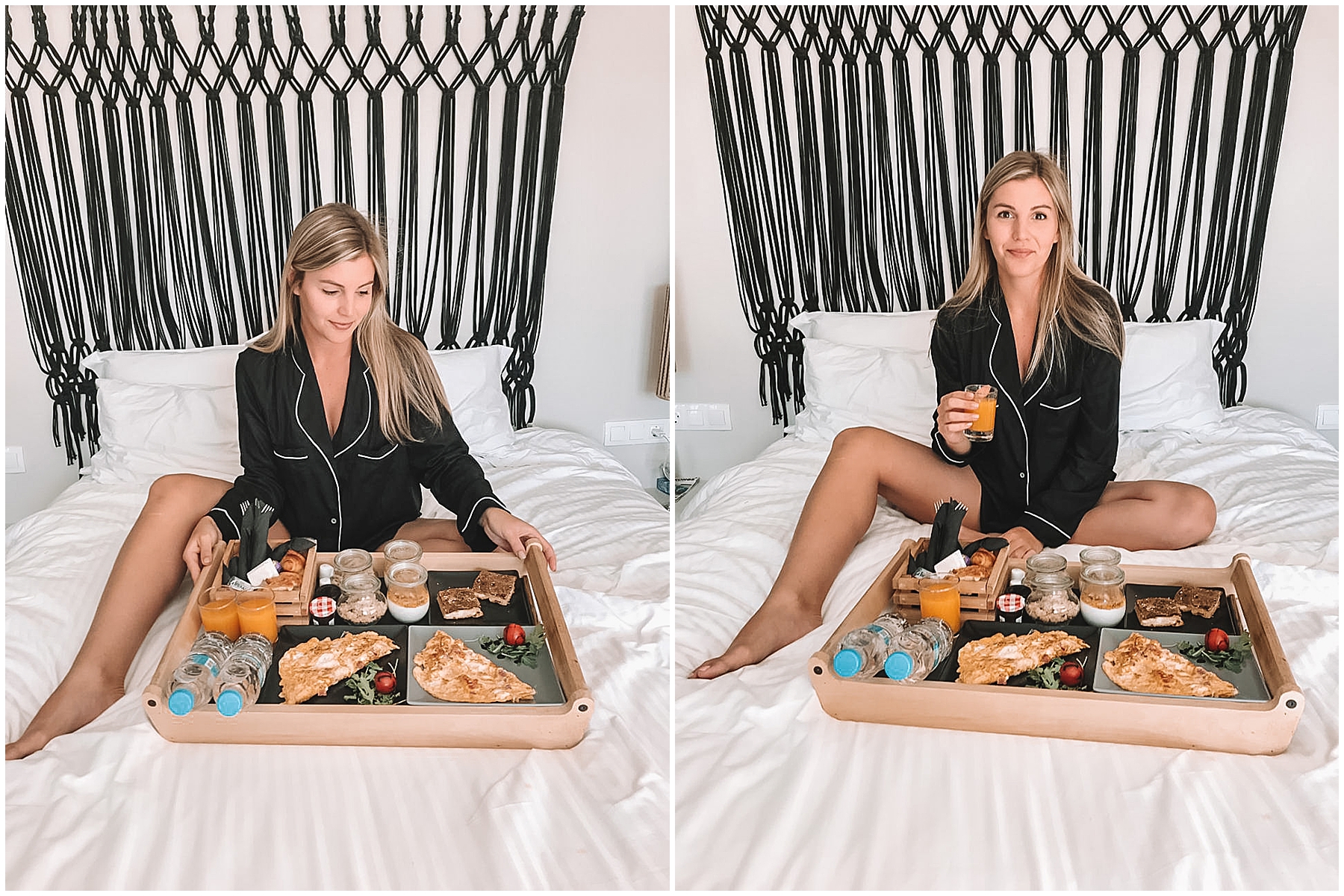 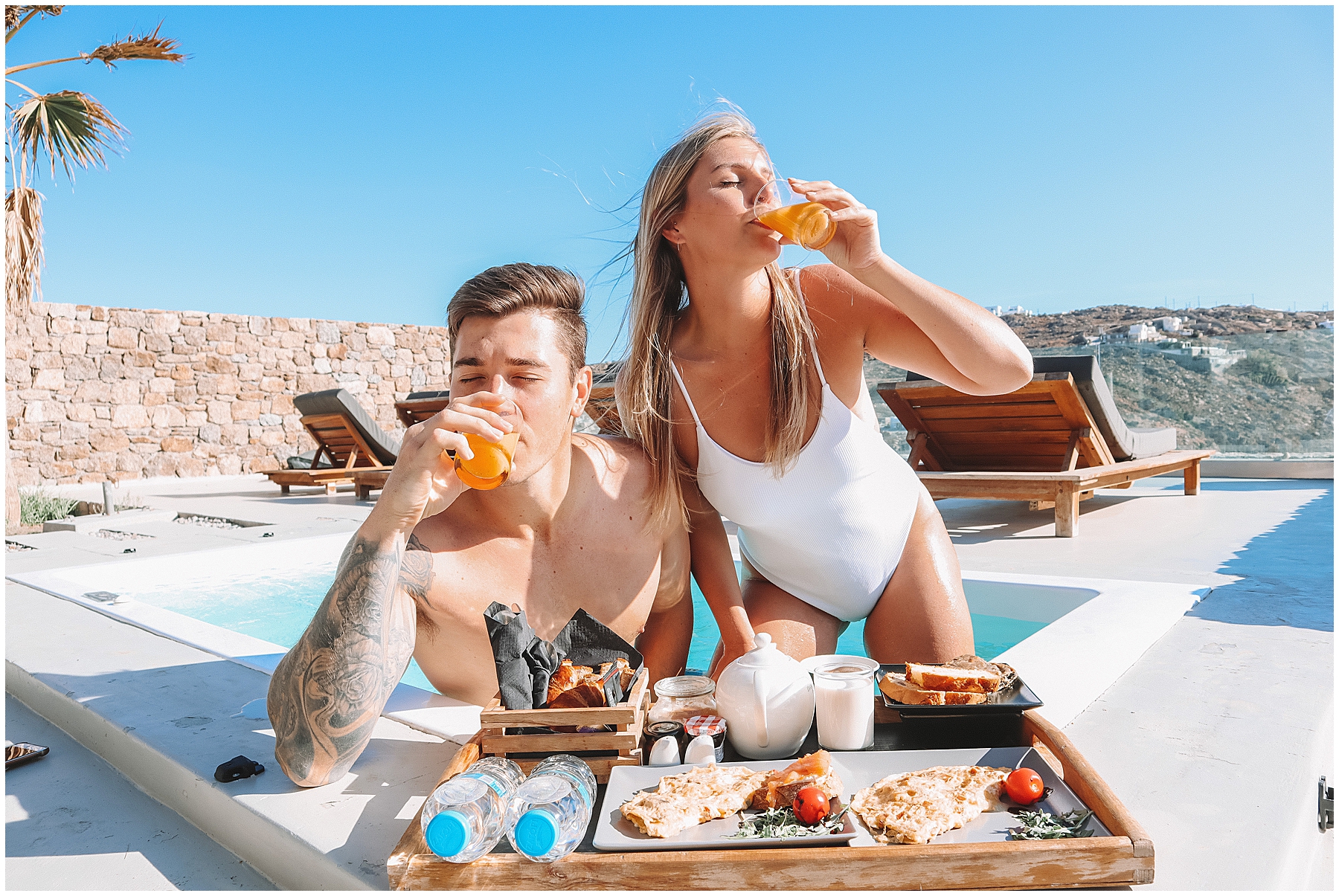 Whilst the Greek islands in general were windy, Mykonos in particular literally ‘blew us away’. Over and above this, Mykonos was far more expensive than any of the other islands and in fact is known for being one of the most expensive places in Europe. We noticed that whilst cocktails, for example, cost about 9-11 euros at the other islands, in Mykonos they ranged between 16-20 euros each (which is just ridiculous). 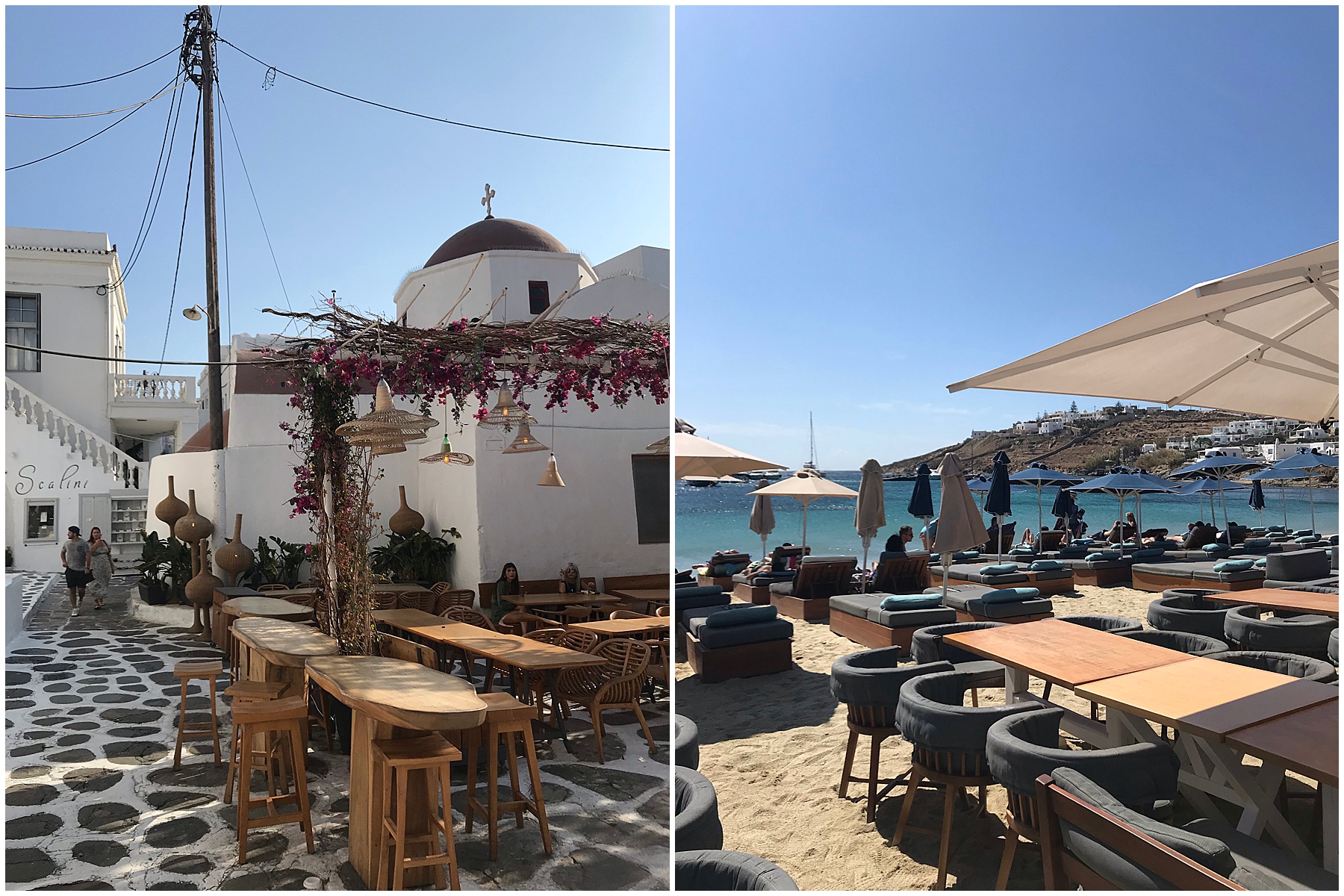 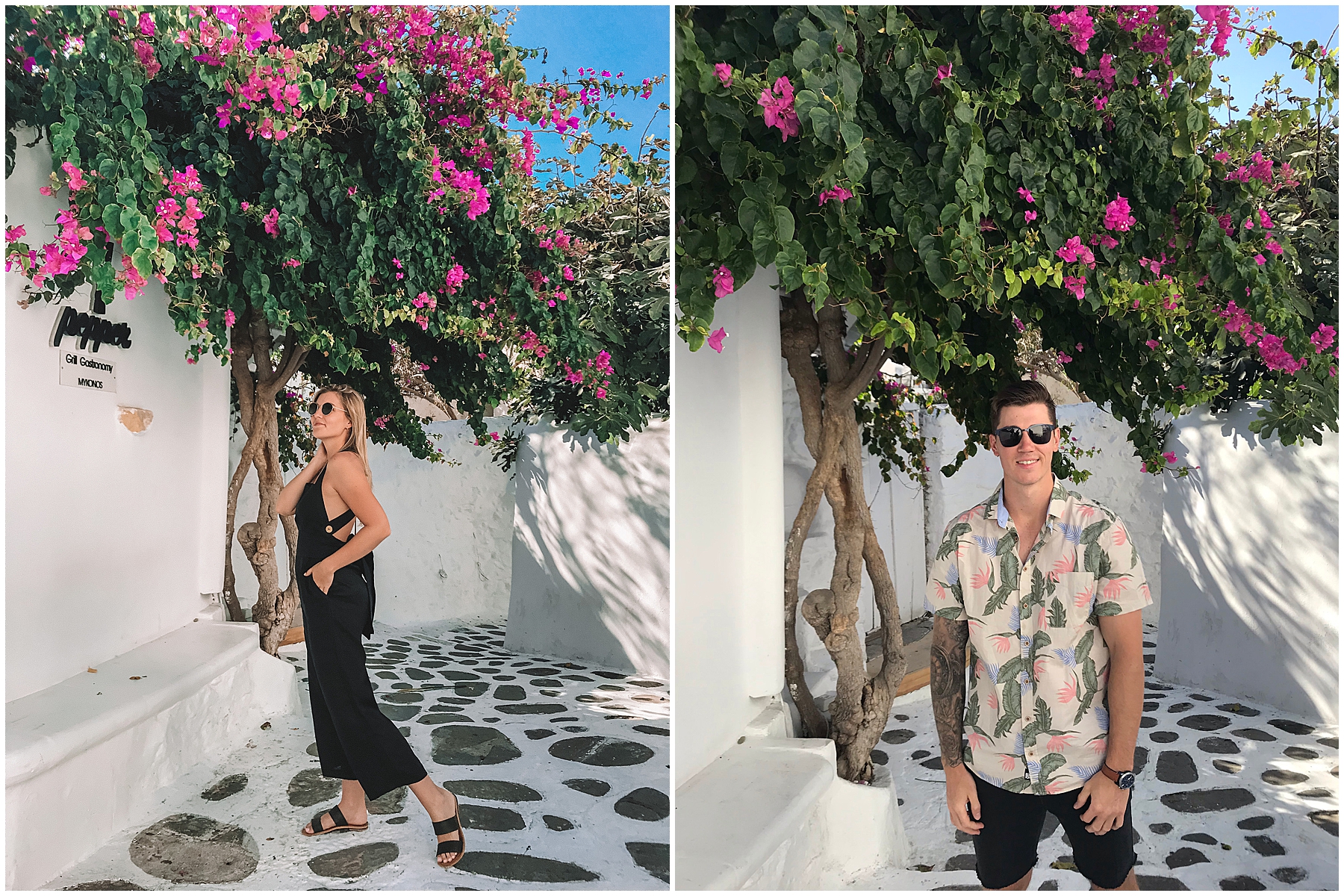 After our stay in town, we took a drive to Super Paradise Beach and stayed at the renowned My Aktis Suites – and what a treat that was! I decided to surprise Brands with our last two nights stay at My Aktis. The hotel is beyond exquisite – from the room, to the view, to the service. We were really looked after and I would definitely suggest spoiling yourself with a night here if you ever were in Mykonos. During the day, we ventured to both Paradise Beach and Super Paradise Beach – both beaches are notorious for their party atmosphere. Again, the sun beds were far more expensive to hire at 40 euros + as opposed to 10-20 euros on other islands. Because of this, we decided to rather enjoy our own private jacuzzi at our humble abode. This was probably the best way to spend our last two nights of our just over 2-week holiday – utter relaxation! 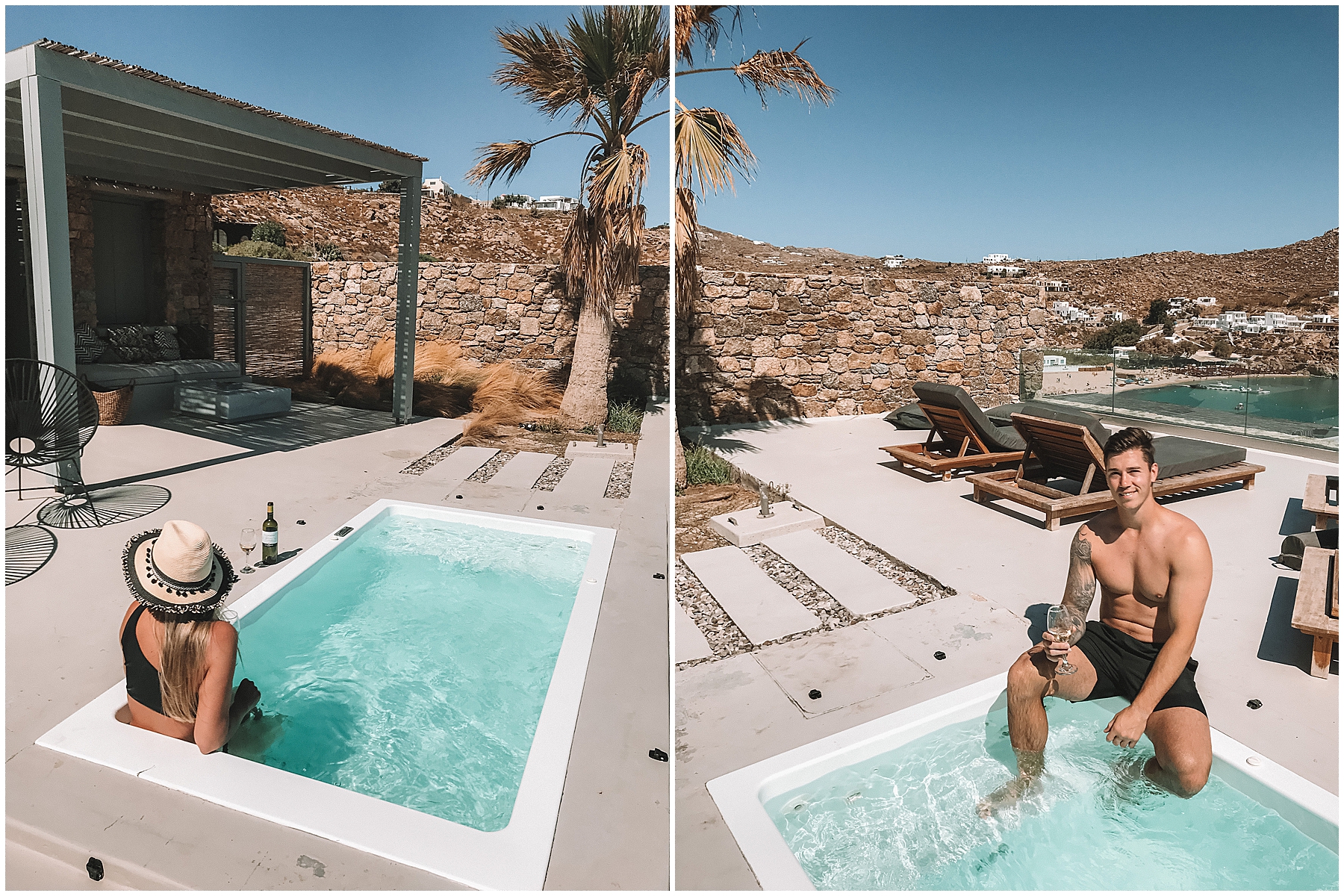 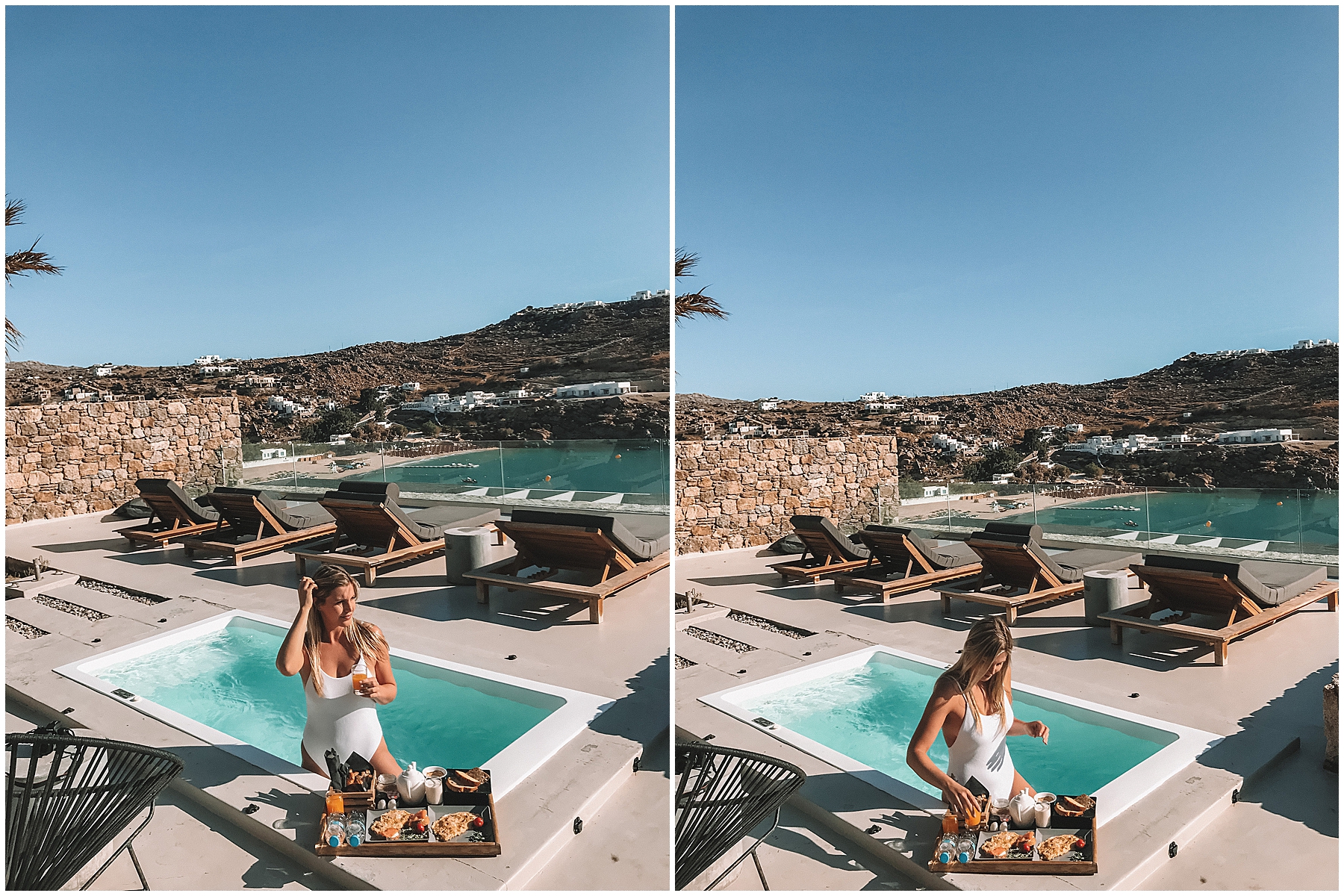 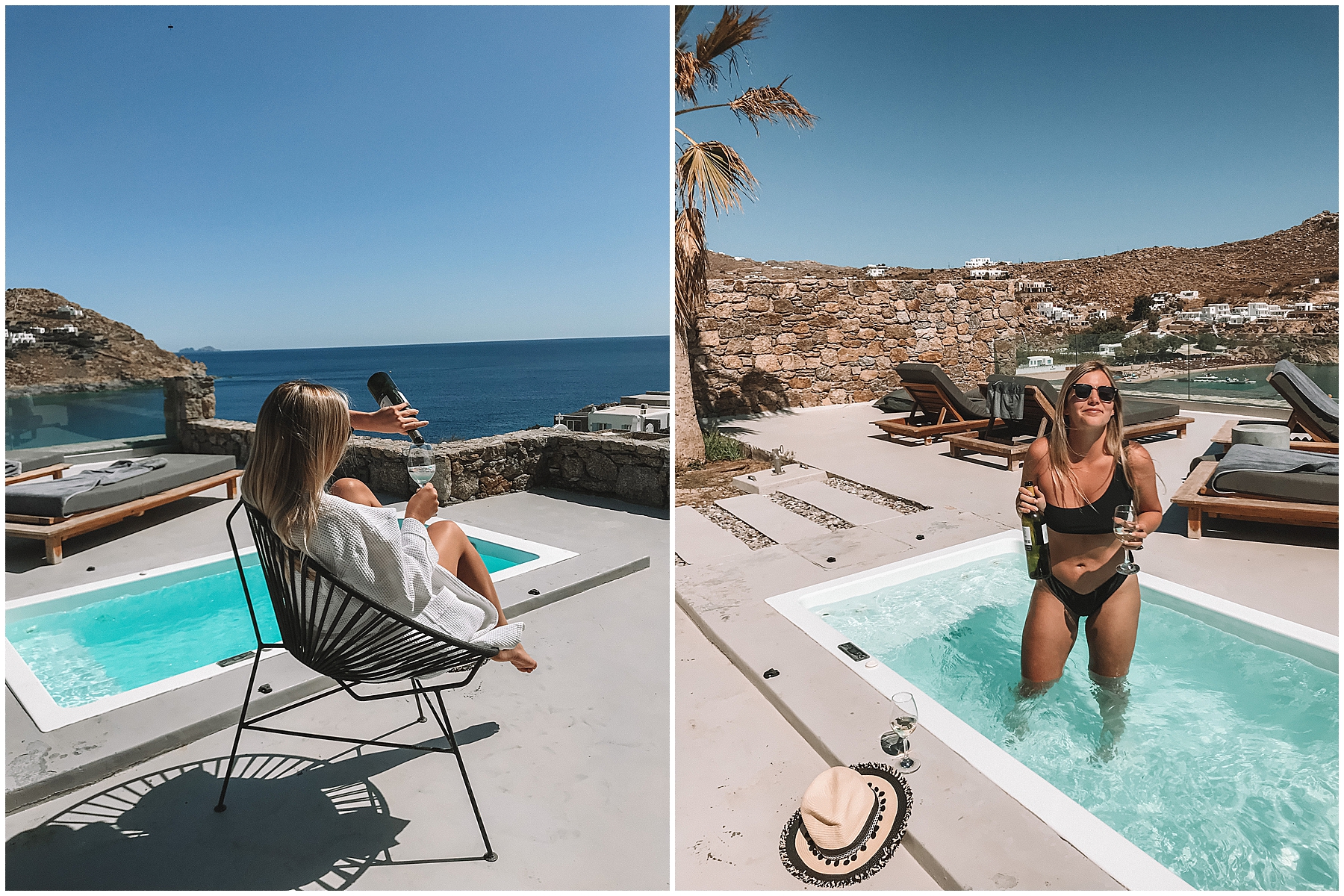 All in all, I would without a doubt return back to Santorini, Milos & Paros. Mykonos was great to see but I just felt you couldn’t even try enjoy the social atmosphere because of the astronomical prices, and the island itself wasn’t really anything to rave about compared to the vibe and feel that we experienced with the other islands. One thing is for sure though, and that is that Branden and myself will definitely be venturing back to Greece in the future. Do yourself a favour and tick this off of your bucket list – you won’t regret it! 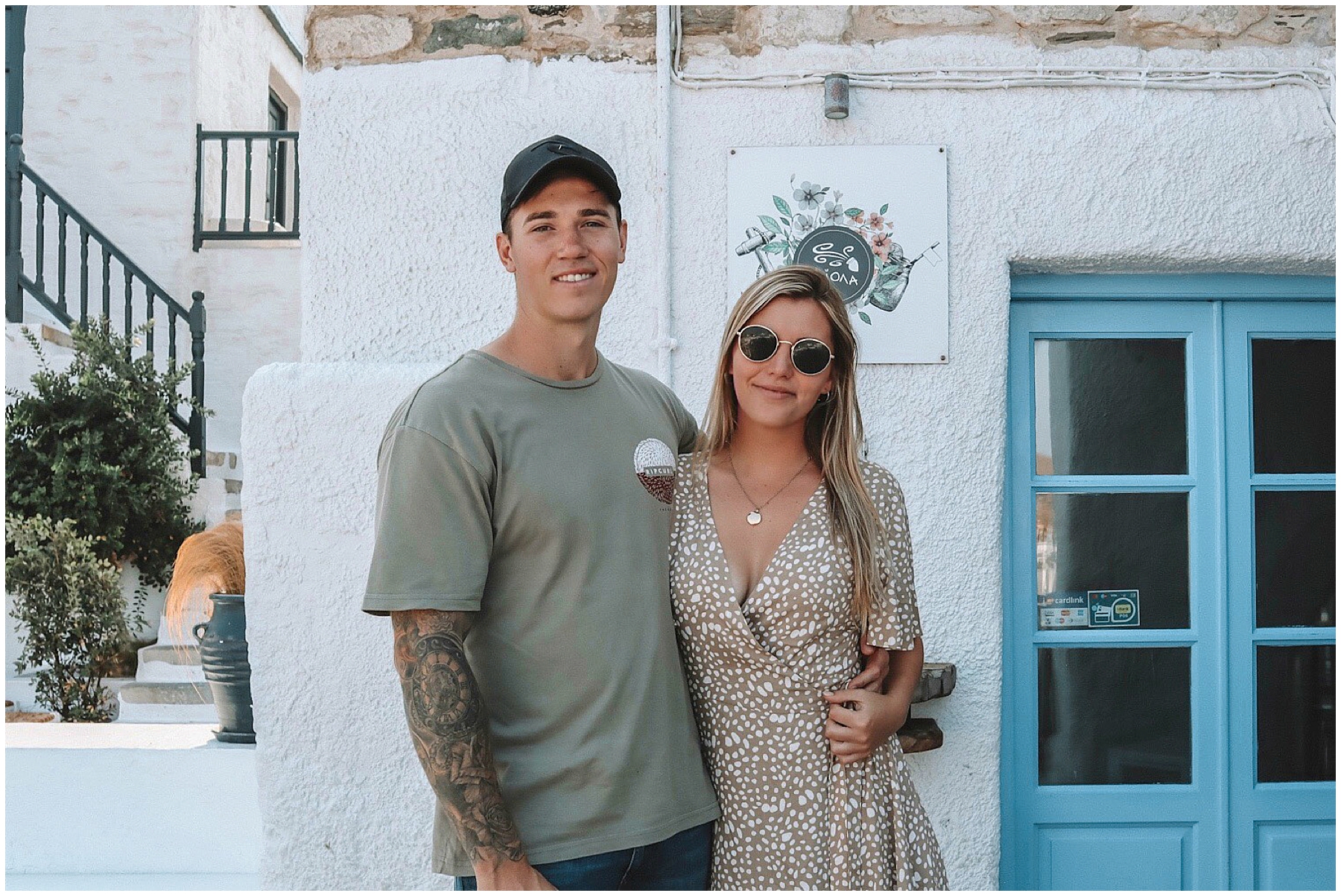 Okay, we are absolutely swooning over all these magical places! Tegs and Branden, thank you so much for sharing your amazing journey with us. We are sure that your tips and gorgeous pics are definitely going to make a few Greek-travellers out of our readers!

If you have travelled recently and would love to share your experience with our readers, then drop me an email with some pics and a short summary of your travel adventures to jenna@hoorayweddings.com