For the Bridal Couple | Tips for a first-time MC

For the bridal couple, Uncategorised

Posted on September 15, 2016 by Candice McGregor

For the Bridal Couple | Tips for a first-time MC

For the bridal couple, Uncategorised

Posted on September 15, 2016 by Candice McGregor

Tips for a first time MC – Being an MC (master of ceremonies) can be a daunting task. What do you need to do? What can you or can’t you say? How many ‘dad jokes’ is too many?

We happen to know a guy who has had the honour of being an MC 8 times. That’s 8 times that Mr Mike Rice has been responsible for making sure an entire wedding (the product of months of planning and preparation) runs smoothly. We asked him a few questions to help future MCs be better prepared. If your MC is a first-timer we definitely recommend sending these tips his or her way. 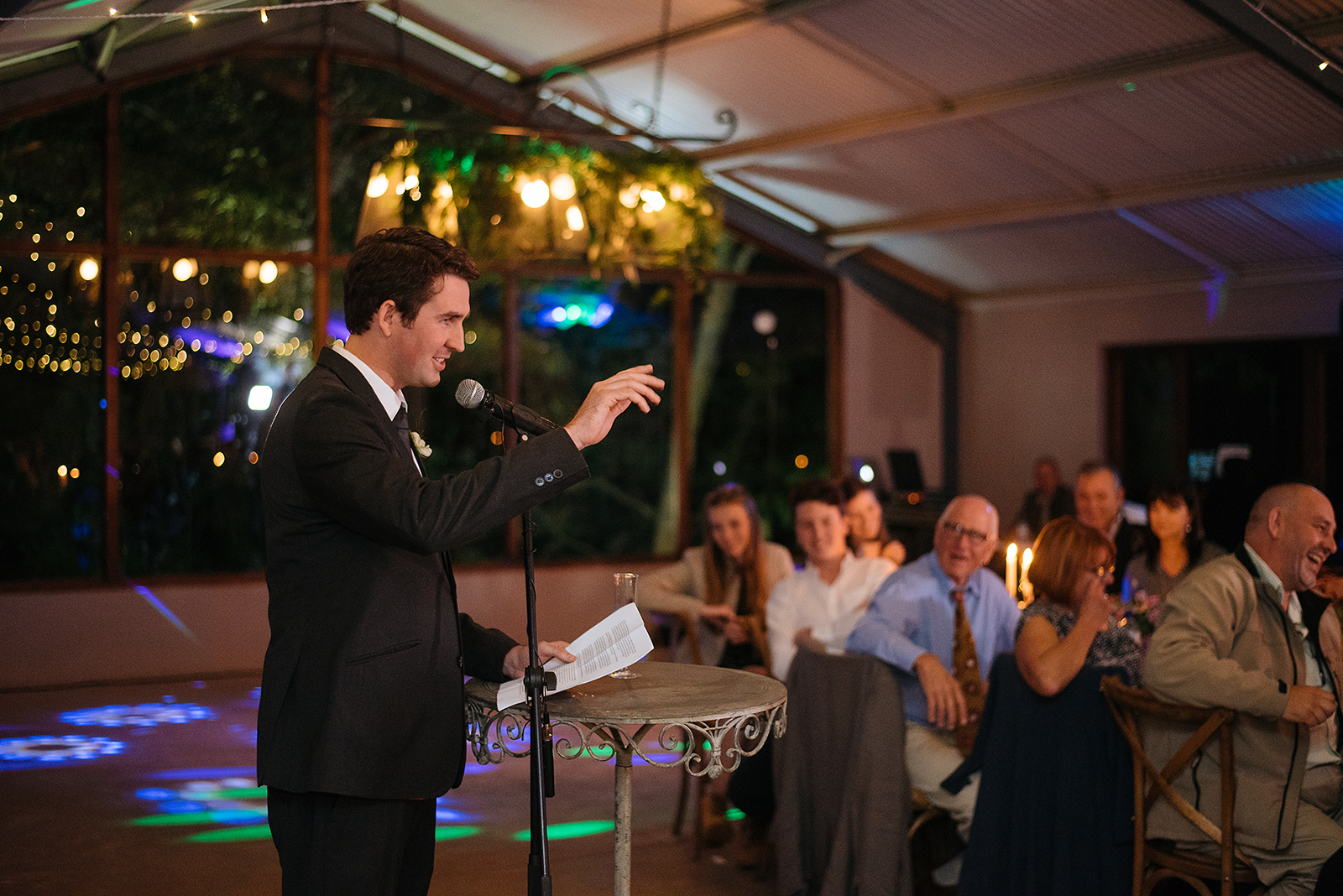 HW: How many times have you been an MC?

MR: Seven or eight times. If you’re foolish enough to do a decent job the first time, you tend to be condemned from then on. I recommend carrying out your first MC job with a fake speech impediment, that way this request will not be made of you again and you’ll be able to concentrate on your love affair with the bar going forward. (Ed’s note: Mike actually LOVES being an MC, he just likes to play the martyr).

HW: How would you suggest a couple go about selecting their MC?

MR: The biggest mistake I have noticed is that the bridal couple selects someone because they are close to them and they would like to honour this person with a title and responsibility in the wedding process. This can turn out badly.

The MC job is two fold…and it is a job!

Firstly, there is the public speaking element, if the person you have selected is shy or does not like public speaking it will be awkward for them and it can get uncomfortable if the crowd sees the speaker visibly struggling. When you ask your MC if they are willing to take up the job confirm that they know the extent of the public speaking involved and make sure they are 100% comfortable with the idea. The MC will be introducing the various speakers throughout the night, announcing important moments and generally keeping the vibe of the evening jovial.

If you are asking a mate who hasn’t done it before, it would only be fair to ask someone who knows the speakers and a majority of the guests. The expectations aren’t as brutal for the new MC and the crowd will be behind them.
Try choose a friend who knows how to tow-the-line and won’t wander into the dreaded “21st speech zone”.

The second element is the behind-the-scenes coordinating with the service providers.
Essentially, the MC is there to ensure that the bridal couple is only aware of an entertaining, coherent evening. They should be blissfully unaware of the desperate Fawlty-Toweresque floundering behind the scenes.

HW: Is a shot or two of Dutch courage advised?

MR: Well, it really depends but the job is a lot to juggle without experience so I certainly wouldn’t recommend liquoring up beforehand. Everything only eases off after the first dance and cutting of the cake. The MC could easily abandon their post if they hit the liquor too hard too early. When that happens, the thin veneer of control disappears and the bridal couple (or an ill-fated family member) might have to pick up the slack. 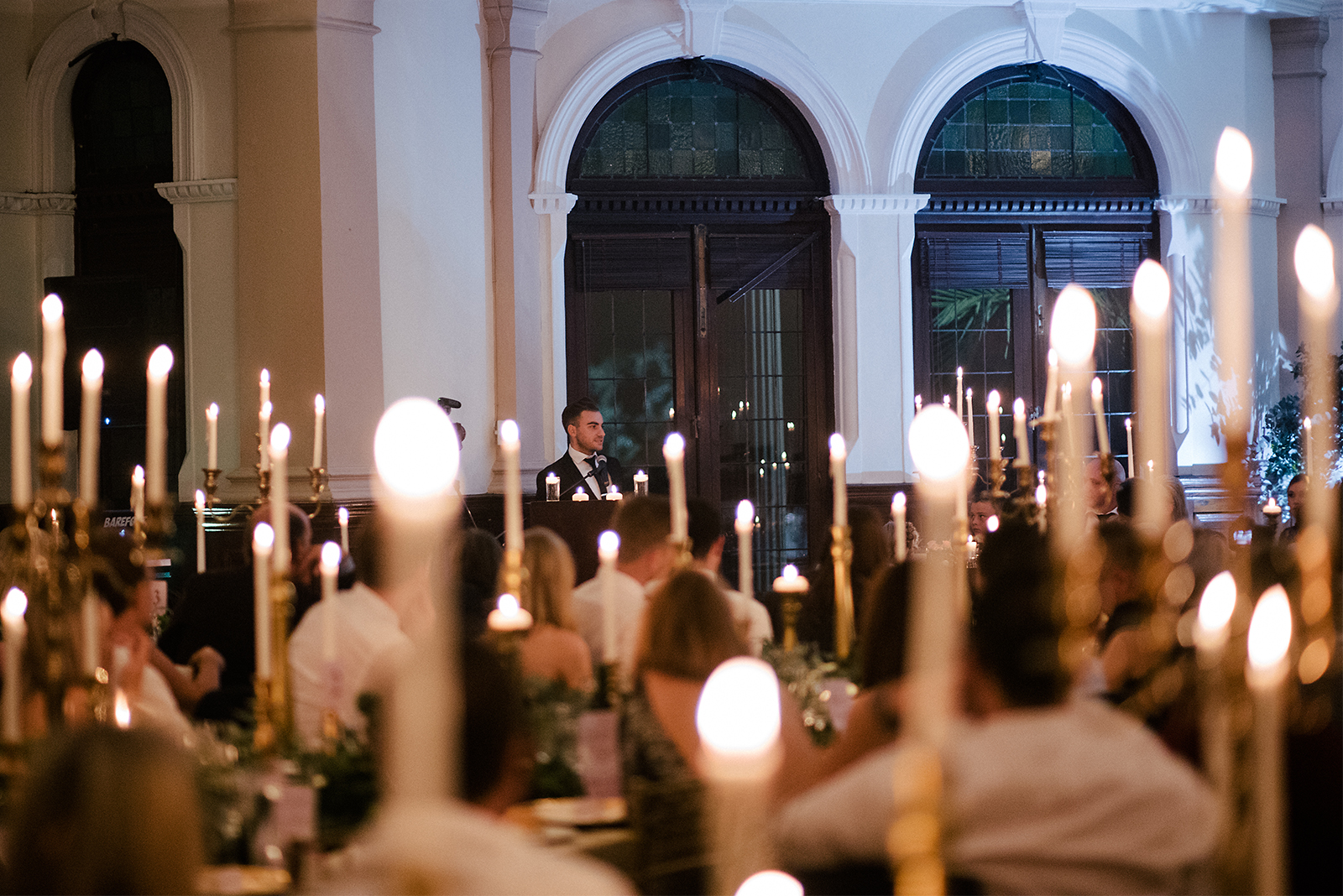 HW: How much research is involved?

MR: There is a fair bit of research involved. I first landed an MC job because the bridal couple felt that I could deliver a good story. I was terribly nervous but felt it was high time that I wrestle with the awful fear of public speaking I suffered at the time.
I prepared well but was rather perplexed as the evening progressed and I repeatedly had the catering staff, wedding coordinator and DJ over my shoulder asking questions and making requests. I was incredibly naïve about all the periphery responsibilities that accompany the MC role. Before that evening, I could never have imagined that the delicate structural integrity of each and every Salmon Cheese Souflee’ was directly dependent on my management of the speeches.

Make sure you are fully aware of all the important events that need to be fitted in and have, in your possession, a detailed agenda for the evening. It is also a good idea to have prior discussions with the service providers and speakers about meal times and speech lengths. This will make your job that much easier as you can anticipate any potential clashes. That said, there have been many a speech that has run over time and it’s your job the make sure that it doesn’t throw the whole night off-balance. Also, on the evening, scout out where you will be speaking and chat to the DJ about how to operate the microphone.

Another element requiring research is the introductions for the various speakers. These are always easier when you know each person as you’ll be able to draw from stories about and experiences with them. Introducing speakers you haven’t met can be slightly more challenging. I suggest doing a little background research on their vibe. Are they the type of person who can take some light-hearted ribbing or is there a serious sore-point that you should definitely avoid mentioning? There’s nothing worse than bringing the mood of the night down, no matter how slight, with an ill-timed joke. 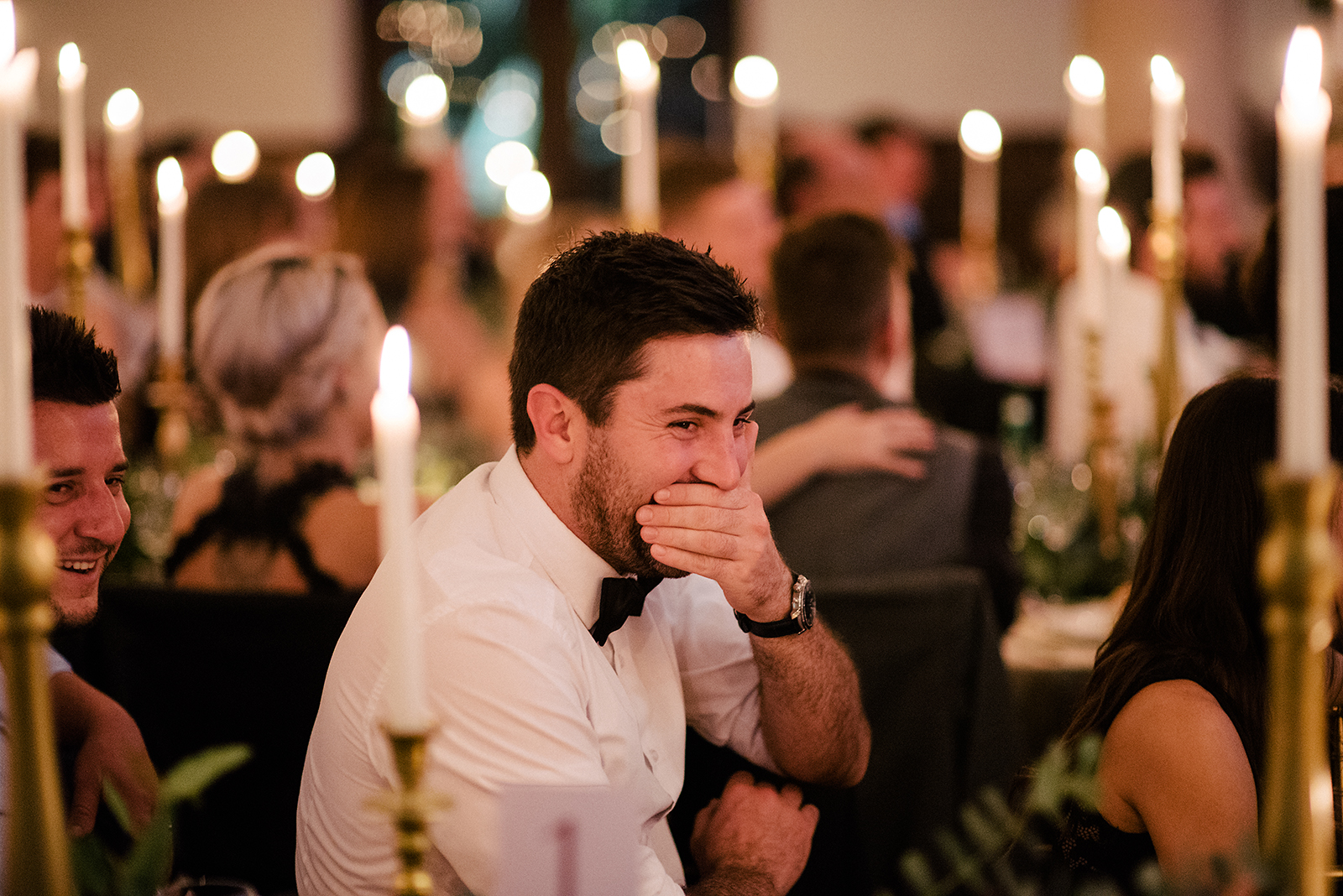 MR: It is important to speak veeerrrryy ssslllloooowwlly. Nerves tend to speed up one’s speech and those gems, that deserve a laugh, might just slip through the net.

HW: What is the most awkward moment you have experienced as an MC?

MR: As mentioned before, it’s always tougher to introduce someone you haven’t met. On this particular night, I was introducing the Father of the Bride.

In the days leading up to the wedding, I worried that my subject matter was a little risqué but hoped that once I laid eyes on the man, his kind, approachable face would put those concerns to bed.

Not so! He was a mountain of a man with a face that would require the combined forces of morphine and happy gas to draw a grimace at best. A smile seemed out of the question.

I told myself to stay strong and stick to the material. With that, I gingerly began with my introduction to Mr Hiscock.

I explained how, at that point of the evening, I generally liked to draw on the man who had generously handed his beloved daughter to another of whom he’d seen fit. I then explained that it was fitting to acknowledge the surname that the bride was to forfeit in this union.

I mentioned that during my research, googling this proud name had a tendency to send me down the rabbit hole and into the clutches of some very questionable websites.
I told the guests that since my wife stumbled upon my recent internet history, there had definitely been a distance between us.

So far I saw no sign of amusement on Mr Hiscock’s face and with every word, I felt I was hurtling towards disaster.

I informed the listeners that I landed upon the perfect description of the name at www.houseofnames.com and went on to explain how “Hiscock” was brought to England in the wave of migration that followed the Norman conquest in 1066.

In my defence, all the information was true to the website.

Of course I had to remain very matter of fact in my delivery and even pretended to be firm with the guests when they laughed at the crude double meaning.

Mr Hiscock’s face remained unchanged and I probably should have thrown the towel in. Sadly I was already in self-destruct mode…and so I continued, “Hiscock is based on the personal name Richard.
It is composed of the elements Hitch(His), which is a pet form of the name Richard”
I added that another pet form for the name Richard is “Dick”.
“As for the suffix “cock” –  this is a medievel term of endearment. “
With that in mind, I asked the congregation to help me give a warm welcome to Father of the Bride, Mr “Dick-Cock”.

As the guests cheered and Mr Hiscock approached, I remembered thinking, “Surely there are far too many witnesses for him to do something silly?”.

A couple of hours later I was enjoying a moment of solitude at the urinal when a shadow cast over me and I felt a powerful presence next to me.
With all the courage I could muster, I slowly looked up to meet with Mr Hiscock’s steely eyes. Settled at the urinal, I took consolation in the fact that I couldn’t compromise myself further.
I drew a deep breath as I prepared to be crushed into a fine powder.

My face was beginning to wince in anticipation of the first blow, when Mr Hiscock’s face suddenly lit up with the warmest of smiles and said, ” Thanks for taking it easy on me. You should have heard what my army mates had to say about my name”.